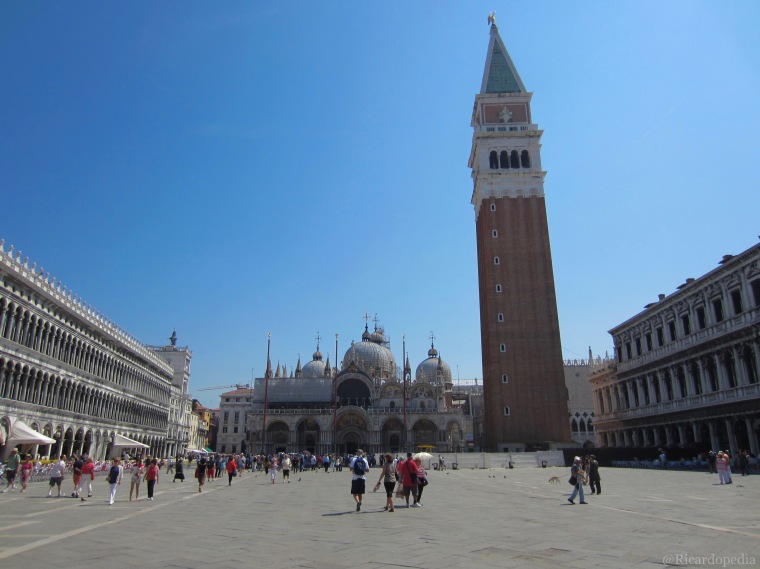 Along the southern edge of Venice’s main islands is Piazza San Marco, the largest and most famous square in the city. During peak tourism season the square is normally swarming with tourists during the day, and given how scenic it is that’s no surprise. At the east end of the square (in the middle of today’s photo) is Basilica San Marco with its eastern-style onion domes. Directly next to it (and partly obscured in today’s photo by the Campanile bell tower) is the Doge’s Palace. Enclosing the square on the north, south, and west are the former office buildings from which Venice’s bureaucrats used to administer the city. These days an assortment of cafes, museums, and other businesses occupy those buildings. The Campanile bell tower you see today was actually built in 1912 to replace an older tower that collapsed in 1902 and has a convenient elevator that takes visitors up to the top. The bells of this tower still ring at the top of the hour, so be ready to cover your ears if you’re up there when they are rung.

Piazza San Marco unfortunately is also one of the parts of Venice that is prone to flooding when the tides get too high. In Italian these high tides are called “acqua alta.” When this happens the city sets up elevated walkways so that people can navigate the square without getting wet. Thankfully the tides do eventually go out again, so if the square is flooded in the morning you normally can come back in the afternoon and be able to walk on dry pavement.

To enjoy Piazza San Marco with the least amount of tourists you’ll need to show up either early or late. Once the tour buses start coming in from the mainland Piazza San Marco and the other popular spots in Venice become swamped as rivers of people surge through the city. If you’re able to spend the night in Venice, however, you’ll get to see Piazza San Marco take on a new vibe in the evening when the crowds abate. The lights in the square turn on and the dueling bands start to perform in the cafes. If you have a significant other with you Piazza San Marco is a great place for a romantic evening. Just be sure you don’t screw it up like one guy I saw back in 2012, whose story you can read here.