A seven hour train ride from Madrid is not my idea of efficient travel, but on the plus side I got to listen to a substantial amount of some audiobooks that I had saved on my iPod. Yes, there are still some of us who use iPods. I received a warm welcome, literally, when I arrived in San Sebastian at around 4:30pm. It was unseasonably warm the entire time I was there, to the point where it felt more like late August than early November. For me this was a particularly big bonus because San Sebastian is one of my favorite places in Spain but I had never been to the seaside city during the summertime. I made a reservation for my next train and then exited the train station. Just outside is the river that flows northward out into the ocean. I followed the river to the last bridge and then crossed over into the old town, where my hostel was. After I found my hostel, I hardly used a map again the entire time I was in San Sebastian. I remember the city well, or at least the coastal parts where I was in during my stay. Later in the day, after dinner, I took a walk around town to reacquaint myself with the city and not long after that I went to bed. There wasn’t much of a plan for the next two days. San Sebastian doesn’t have too much in the way of historical attractions–it’s a city known more for its beaches than its museums–but during my time there I think I managed to get a decent balance of sightseeing and relaxing.

Canons on the old fort

Inside the Buen Pastor cathedral

View of the old city from the beach

The next day I didn’t set out from the hostel until the late morning. For the most part I retraced my steps from my previous visit in 2012. I looked around the old town for awhile before starting my climb up Monte Urgull; the hill next to the old town. There are the remains of an old fort up on the hill, along with a large statue of Jesus at the top. In the fortifications under the Jesus statue is a small museum on the history of San Sebastian. Although I couldn’t fully read all the displays, the images and models were enough for me to see how the city used to look and how its expanded over the years. Hiking across Monte Urgull, I started to sweat a little. I was not expecting such a warm day on the Atlantic coast in November, but I also wasn’t complaining. Summer weather without summer crowds is fine by me. I came down the hill and started the long walk around the bay. After passing the city hall I went onto the beach itself. The last time I was in San Sebastian a rainstorm had just passed through and not many people were on the beach, but with the sun shining brightly a lot more people were out that day. The tide was coming in and I had to be careful not to get wet from a stray wave. I passed by what I refer to as “Fort Isabel,” a turreted restaurant that protrudes onto the beach, and exited the beach further on where the rocks jut out and divide sections of the beach. I then kept going, but on pavement, passing through a small park and all the way to the end of the beach. The tamarind trees (I could be wrong about what type of trees they are) still had their stalks and leaves for the year. In 2012 I was in San Sebastian in April, when all of those trees are pruned and don’t have any new growths, so it was interesting to finally see what they look like with leaves on them. To get to the viewpoint atop Monte Igueldo, the hill at the other end of the bay, I got on the funicular that goes up to the amusement park on the hill and then climbed the tower at the top of it. The tower has the best views of the city and I’m pretty sure the same lady and her dog that were working there were also there in 2012. I got photos from up the top of the tower and then just spent awhile looking out over the city and surrounding area. Eventually I came down, though I certainly could have spent longer up there. I then did the long walk back towards the old town, though I stopped along the way over at the Buen Pastor Cathedral. When I got there I saw that it wasn’t going to be open to the public for another half hour, so I walked to the beach and just sat around until the opening time came. I then went back to Buen Pastor and took a look inside. Buen Pastor has a fairly plain interior, but it was free and I wasn’t exactly in a rush to get anywhere. After leaving the cathedral I took a little time walking in one of the newer districts just south of the old town, before taking the road that circles around Monte Urgull. It was evening when I returned to the hostel to eat dinner and check email. At night I took another walk around town and got some decent gelato. While on my walk I went over to the Gros district, just east of the old town and on the other side of the river. There’s a large building there that looks like cement blocks but apparently holds a theater, a few shops, a restaurant, and a modern art gallery. The Gros district is also home to San Sebastian’s second major beach, which has larger waves than the main beach because it has nothing to break them (the main beach has an island out in the bay that minimizes the waves). After awhile I returned to the hostel and went to bed.

Viewing of the city from the fort

Wandering the old city at night

Cheering on the runners 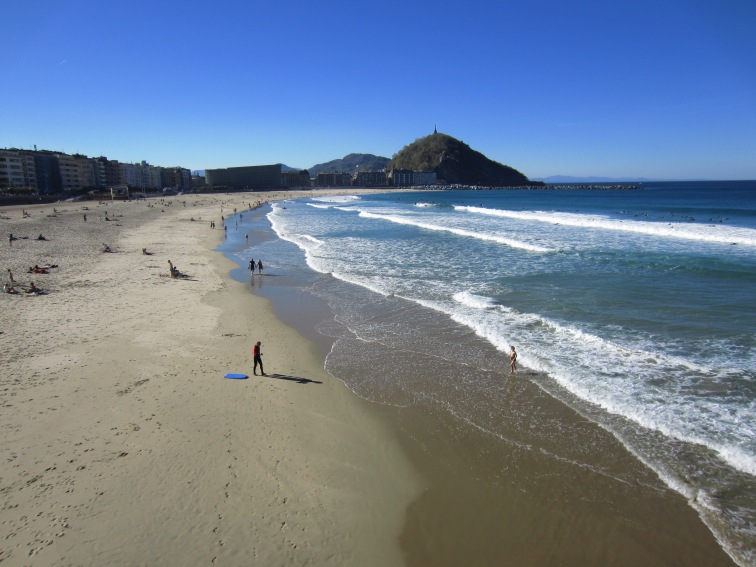 When I left the hostel the next day it was again late morning. This time, however, I came out to the sight of a half-marathon in progress just a few blocks from where I was staying. The finish line was in the old town and I got there a minute before the winner crossed the line. It must be a popular race because I saw at least a few thousand runners go by during my two hours along the last leg of the racecourse. There was a tower that had been erected nearby where I took a seat and the guy in the tower was playing music and continually letting the passing runners know that they were on the final kilometer of the race. When I left the race area there were still lots of people running by. I walked to the nearby beach in the Gros district and then spent some time watching the surfers out there. The waves weren’t that big but still big enough for the surfers to catch and ride them. I then did the loop around Monte Urgull again and when I came back around to the old town it looked like the last of the runners were crossing the finish line. A lot of the runners who had already finished were flooding the bars in the old town and crowding the streets. My train to Pamplona was in the late afternoon, so I still had a little time before I needed to grab my backpack. I spent that remaining time just walking and relaxing. It was over soon enough, and I departed San Sebastian. Ahead of me I had a short stay in Pamplona, followed by the finale of my time in Spain.