Last week Nintendo announced that they would be releasing a miniature version of the old Nintendo Entertainment System (NES) this November. This Mini-NES will come with thirty NES games preinstalled, including a number of NES classics such as The Legend of Zelda, Metroid, Super Mario Bros, Donkey Kong, Castlevania, Tecmo Bowl, and Final Fantasy. The Mini-NES will also come with a controller that looks like just an original NES controller. 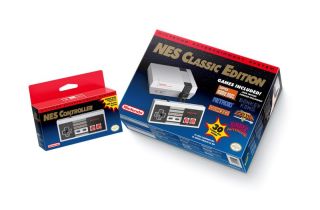 For me this is a big announcement, and I’m strongly considering buying this Mini-NES, though, as always, it will likely be some time after it launches that I’d purchase it. I didn’t have a gaming console growing up, and though I got a few scattered chances to play NES games when I visited friends’ houses, I can’t say that I have a heritage with that era of gaming. This Mini-NES would give me the chance to go back and experience some of the games that are so foundational to today’s video games. If and when I eventually purchase the Mini-NES, I’ll be sure to do a series of posts on the games that I play on it.