A year ago I was in Europe and lately I’ve been thinking over some of the places that were the most memorable from that trip. If you read my travelogue posts from back then you already know the details of each place I visited, but I thought I’d do a series of short writing pieces over the next three or so weeks where I give my thoughts on particular cities or regions as a whole. I’m not going to talk about every location – just the ones that have been on my mind. The order that I write about them will be in the approximate chronological order of when I visited and each writing piece will feature two locations with a photo from the trip to accompany each of them. As a bonus, at the end of each writing piece I’ll note where I was, one year ago that day. 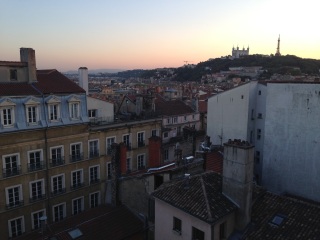 Lyon is urban France. Paris may be bigger and more populous, but Lyon does not have Paris’ building restrictions, so it feels more modern and crowded. When I think of Lyon I think of tall apartment buildings, shopping malls, busy streets, and masses of people with places to go. But with all its modernity, Lyon is still a city with a long history, and past and present are oftentimes not far from one another, as in the case of the remains of the second oldest church in Western Europe being right across the street from a courthouse. This merging of antiquity with modernity is probably best symbolized by the confluence of the two rivers that divide the city. I walked down to the point where the rivers come together and found it sort of mesmerizing to watch the faster, clearer Rhone merge with the slower, murkier Saone. Also there are mysterious tram tracks down there that go directly into the water. That’s probably symbolic of something but I don’t know what.
Cote d’Azure 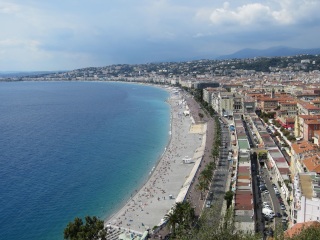 The waters of the French Riviera are so beautiful that it’s a shame they don’t have good sand beaches to go with them. Growing up in Southern California, I thought all beaches were as nice as that ones I knew from back then, but that is not the case. In all honesty, the pebble beaches in and around Nice are fine, and I can understand why this part of France has been a resort for the rest of Europe for the last 200 or so years. Warm, sunny days. Leisurely strolling by the beach. Stunning blue waters. Look around and you’ll see Belgians, Germans, Russians, and other visitors who escaped colder lands in order to soak up the sun. Nearby in Monaco you can stand outside the famous casino and see an unending train of expensive cars rolling in to pickup and offload people with too much money on their hands. I don’t have that kind of money, so instead I took a swim in the Mediterranean during the day and satisfied myself with a gelato or ice cream at night. The French Riviera might not be as good as SoCal, but it’ll do.

On this day, one year ago, I bought a 24-hour water bus pass and maxed it out exploring the Venice lagoon. In doing so I found one my favorite places in Venice, a small park with a vineyard on the Mazzorbo island cluster.