A year ago I was in Europe and lately I’ve been thinking over some of the places that were the most memorable from that trip. If you read my travelogue posts from back then you already know the details of each place I visited, but I thought I’d do a series of short writing pieces over the next three or so weeks where I give my thoughts on particular cities or regions as a whole. I’m not going to talk about every location; just the ones that have been on my mind. The order that I write about them will be in the approximate chronological order of when I visited and each writing piece will feature two locations with a photo from the trip to accompany each of them. As a bonus, at the end of each writing piece I’ll note where I was, one year ago that day. 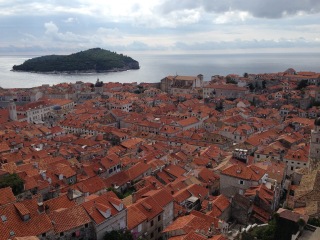 Already popular with tourists before Game of Thrones brought in even more of them, Dubrovnik is the Venice of Croatia in that it’s the most expensive city in the country. Unlike Venice, however, there’s no point spending extra money to stay within the old city walls, as you can easily walk into the old city at any time. When I think of Dubrovnik, I think of stairs, toasty walls, and roof tiles. I think of stairs because the steep terrain means lots climbing. I think of toasty walls because the stone walls of Dubrovnik have almost no cover and can be like an oven in warm weather (bring water!). I think of roof tiles because if you look at the city from up on the walls you’ll notice the different color tiles, which are a result of the city being under siege in the early 1990s. The brighter, newer tiles mean that a roof took a hit from the shelling and duller, older tiles mean the roof escaped the worst of it. With the small size of the old city, there’s no escaping the tourist horde, which shows up each morning by the busload and surges onto the main thoroughfare before fanning out in every direction. It’s quite a sight to observe from up on the walls, but also means you can’t really find a spot of your own in the city. Still, there’s an undeniable beauty and charm to Dubrovnik, and if you ride the gondola up the hill next to the city at close to sunset you can get some spectacular views.
Kotor

Montenegro seems to be next in line to get thoroughly redeveloped for and invaded by tourism, and Kotor will be one the country’s star attractions when that happens. Kotor lies in the Bay of Kotor, which is a lot like a fjord you would find in Norway, but without any glaciers. I only got a few hours in and around Kotor, so I can’t say too much about it, but Kotor has earned a spot on my list of places that I really want to come back to. This is partly because of how scenic the area is and partly because I didn’t get any good photos due to really bad weather. The walls of Kotor run up the mountain behind the old city and remind me of the Great Wall of China, but on a much smaller scale. Had I not been in Kotor during a torrential downpour, I would have climbed them. Hopefully I can one day return to Kotor and get a better feel for it, and hopefully I’ll walk away thankful that I did.

On this day, one year ago, I took a day trip from Dubrovnik down to Montenegro and while there I visited Kotor. Seriously, I didn’t realize when I was planning out these writing pieces that the timing for certain ones would align such that I’m publishing on the exact anniversary of being there. Anyways, it rained nonstop from sunrise to sunset that day, so I got pretty wet, but it was still a worthwhile trip.