Hello everyone, and welcome to Late to the Party, a series in which I discuss video games that I’ve finally got around to playing. As much as I enjoy games, it’s rare for me to play them right when they are first released. Normally it takes me anywhere from a few months to a few years to get around to playing to a game, and because of this I’ve got a considerable backlog of games that I’ve been meaning to play. From time to time I’m able to chip away at that backlog and whenever I do so I like to write about it in this series. Today I’m going to tell you about Bound, a surreal 3D platformer. This discussion might contain some minor spoilers but not anything too big.

Developed by Polish studio Plastic together with Sony Santa Monica Studios, Bound first caught my attention in the days leading up to the 2015 PlayStation Experience (PSX). Bound’s teaser trailer had me intrigued and earned it a spot on the list of games I wanted to check out when I was at PSX, though I didn’t think much more about it until I was at the convention. Walking the floor of PSX, I distinctly remember moving towards the back of the show floor and seeing a group of stations that had an odd looking game playing on them. Sure enough, it was Bound, and I made my way to one of the stations and grabbed a controller. Ten minutes later I was sold. Artsy games don’t always hook me but Bound’s looks and gameplay were unlike anything I played before. One of Bound’s development staff afterwards asked me if I had any feedback I could give to improve the game. I was speechless—I had no suggestions. The only thing I could ask for was more of the game. Bound became my personal Game of the Show for PSX 2015 and I left the convention knowing I would eventually play it. Two years later I was trying to decide which game would lead off this new era of Late to the Party and Bound emerged victorious from the melee. It just felt right to start with this game. With the matter settled, I began the dance.

Bound opens in an unexpected way, with a woman on the beach holding a notebook. As she slowly strolls the beach, steadily making her way towards a nearby house, she opens the notebook to look upon drawings she had made inside it when she was younger. Those drawings transport the player to a fantastical world where most of Bound takes place. In the dreamscape you assume the role of a young princess tasked with protecting her kingdom from a roaming monster. Traversing her ever-changing world with the grace of a ballerina, the princess searches for an end to her kingdom’s troubles, and in each level she recovers memory fragments that help the player piece together the greater story of the woman on the beach. Bound is a short game and it’s storytelling doesn’t quite pack the punch of some other small games like Journey, but it’s an emotional tale that may strike a cord with certain players. For my part I liked Bound’s story and I think Plastic did a good job overall in conveying it in the way that they do in the game.

Messing around with Photo Mode

For most people, however, Bound will probably be remembered much more for its visuals and gameplay than its story. The world of the woman on the beach isn’t anything special, and indeed I wouldn’t fault you if at first you thought you were playing a last-gen console game, but the moment you enter the realm of the princess you’ll see what’s so special about Bound. The princess’ polygonal world is like something out of a surreal dream. Objects float peacefully in the sky. An ocean of cubes ripple and churn beneath you. Paper airplanes swarm like gnats. Gravity’s orientation shifts from one platform to the next. Everything around the princess is in a state of breaking apart and coming back together. I’ve never used LSD, but I imagine this is what the world would look like if I did. The princess is perfectly at home in this strange land, deftly traversing it with the graceful and stylized moves of a professional ballet dancer. She runs, jumps, flips, and pirouettes from one area to the next, and when faced with danger she brings forth her inner strength by dancing. As weird as all of this may sound, in the context of the game it somehow just feels right and even though there are a few scattered gameplay and visual issues you may run into, none of them detract significantly from the experience.

Bounding from one level to another, (pun fully intended) you’ll likely finish the game in a single sitting of about two hours. There is a bit of replay value in that you can go through the game again and changeup the order that you play the levels, or you can try speed running the game, but I suspect for a lot of people Bound is the sort of game that will only get played once. Personally, I played Bound twice and then spent a little more time messing around with Photo Mode—a feature I always appreciate in a video game. I’d certainly recommend Bound to anyone who’s looking to try something a little out of the ordinary and doesn’t mind short games. If I were to give Bound some sort of score it would probably be somewhere in the area of 7.5 to 8 out of 10. It’s a short but imaginative game and I’ll definitely be coming back to it at least one more time this year. 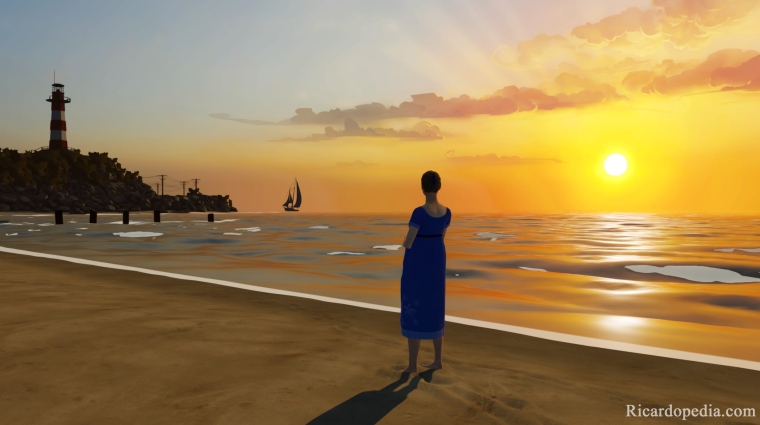 I’ll be back. Just wait for me here.