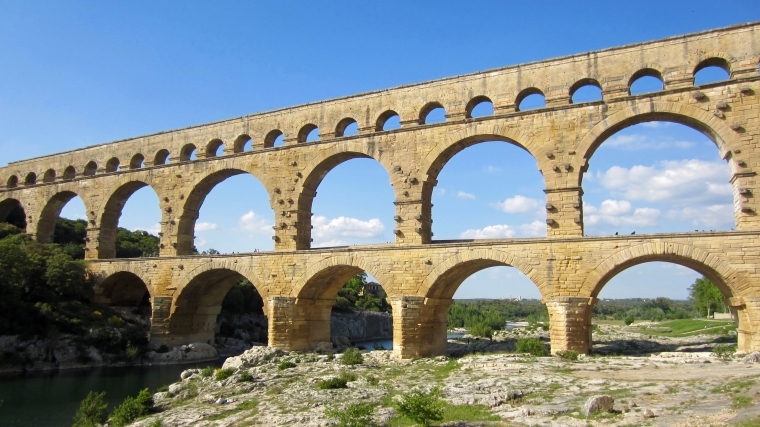 Six years ago today I was in Southern France visiting Pont du Gard, a 50-kilometer ancient Roman aqueduct that used to deliver water to the city of Nimes. Pont du Gard is one of the best-preserved Roman aqueducts in Europe and in the above photo is its most famous section, which spans the gorge of the Gardon River. If I remember correctly, there is almost no mortar in the aqueduct bridge and the whole thing was built with expertly cut stones that perfectly fit together and only use friction and gravity to keep the structure standing. Up until the 1990s you could even drive a car across it.

I visited Pont du Gard as a day trip from Avignon and on the bus I met a pair of Americans who were also on their own trek across Europe. Later on I ran into them again in Avignon and we got dinner together. It was a pleasant day when I was at Pont du Gard and I remember there were a few people paddling down the river in canoes and some others wading into the water. To get this photo I came down from the aqueduct bridge and onto the rocky ground beneath it. The terrain was very uneven and I remember having to be really careful with my footwork to keep myself from tripping over something. After an hour or two of walking all around the aqueduct I left Pont du Gard and returned to Avignon, but not before getting some ice cream at the aqueduct’s Visitor Center. A man has to have priorities.