SPOILERS FOR TALES FROM THE BORDERLANDS IN THIS POST

On Friday I published the latest edition of Late to the Party with my thoughts on Tales from the Borderlands. In order to keep that post spoiler-free I didn’t mention any of the decisions I made in the game but today I’m going to tell you some of the choices I made. Obviously there are many, many more decisions in the game than just those listed below, but these are the ones I remember the most.

* Told Loaderbot to escape
In my game Rhys betrays no one, not even a potentially expendable robot guardian.

* Let Shade come with me
As creepy as Shade is, I figured keeping him close would limit the amount of trouble he could cause. This turned out to be correct.

* Saved a bullet (didn’t try to shoot August)
Even though Fiona looks really cool as she rotates through the air and deploys her hidden derringer, since I only had one bullet I thought it best to save it for later.

* Trusted Sasha (let her take the stun baton)
Rhys is a good man in my game and I had him try to build up some trust with Sasha from early on.

* Warned Felix about the bomb
Felix may have betrayed Fiona but he’s still her (adoptive) father.

* Told Vaughn about Handsome Jack
Again, in my game Rhys is always a friend to Vaughn and that means not hiding an AI program of Handsome Jack running amok in Rhys’ head.

* Fiona didn’t peak at Sasha’s gift from Felix
I figured Sasha’s gift would be revealed eventually (and it was) so I had Fiona be a respectful sister and not open the gift.

* Told Vallory that it was Vasquez who messed up the deal
I briefly thought about blaming August, but it was time for Vasquez to get what was coming to him.

* Didn’t pick the flower for Sasha
Shipping Rhys and Sasha felt way too obvious and forced in this game. I kept them at just being friends.

* Kept Athena from killing Cassius
The cycle of hate must end. I also figured Cassius might be useful later (and he was).

* Didn’t try to run from the Stranger
This ended up not making much of a difference, but I hoped it might gain his trust.

* Told Fiona and Sasha about Handsome Jack
Rhys was honest to a fault in my game.

* Talked down Yvette
As tempting as it was to use the stun baton, talking her down seemed like the best way to not blow Rhys’ cover.

* Ripped the mural to get arrested
It turned out there was a treasure map behind it.

* Forgave Yvette and let her go free and then saved her life later on
Yes, she double-crossed Rhys and almost got everyone thrown in jail, but in my game Rhys hands out forgiveness like candy on Halloween.

* Kept Jack’s AI
For me this felt like the game’s biggest decision. One day Jack’s AI program might get loose, but keeping him trapped seemed like the worse punishment for him.

* Final team: Athena, Cassius, August
I had every potential team member unlocked (except the mystery character) and originally I picked Athena, Cassius, and Felix, but Felix bails on you. For some reason I couldn’t select Zero as Felix’s substitute, so I went with August. 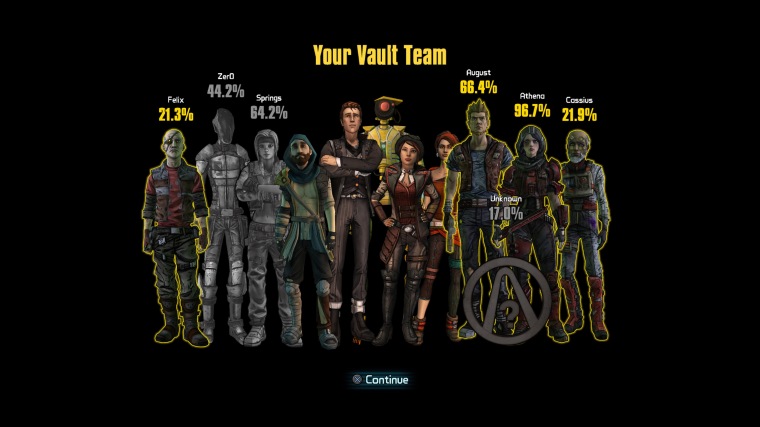 * Totally shipped Rhys and Fiona
I realize it’s super cliche to ship the lead male and female protagonists who at start the story don’t like each other, but I really don’t care. Rhys x Fiona forever!