Last month I gave an in-progress review of the game I’m currently playing, Mass Effect: Andromeda. Over the past two to three weeks I’ve made a big push and gotten a lot farther along in the game so I decided it was time for a second in-progress discussion of it. If you’ve not already read my previous in-progress post I highly recommend doing so as it details the basics of the game and today’s post builds on it. A link to that post can be found here. Today I’m going to lay out some additional thoughts I’ve had since that first post and give you an update on how I think I might score the game. There isn’t anything in the text of today’s post that I would consider to be a major spoiler and although the images that I’ve embedded below come from the middle sections of the game I’ve been careful to only select ones that don’t give away significant plot details.

When I started playing Andromeda I knew the game was big but it wasn’t until a bit after I published my previous post that I realized just how long it was going to take me to finish it. Andromeda is one of those games where you spend hours cleaning up side missions and just when you think you’re getting all these extra tasks under control, the game drops another dozen into your lap. Everyone else in this galaxy is either incompetent or lacks the means to do their job, so I get to be everyone’s errand boy. Sure, you don’t have to do the side missions to finish the game, but for someone like me who doesn’t like a cluttered galaxy map it means a lot of time gets spent doing all these additional missions. At around 80 hours into the game I finally hit the point where I decided I was going to let certain side missions slide—specifically the ones where you have to run around looking for stuff to complete them. If a mission didn’t have a waypoint, I wasn’t going to pursue it.

All that time spent playing the game, however, has given me a greater appreciation for the things Andromeda does right, such as the combat. The more I play, the more I like the improvements made to the way Ryder moves in combat, namely with the jump-jet and dashing. Skirmishes in Andromeda are notably faster and more dynamic than in previous Mass Effect games thanks to these additions. I also like that using melee attacks on enemies is a much more viable tactic in Andromeda, particularly with a certain melee weapon that allows you to teleport right up to enemies and then strike them. The only thing that’s really a downgrade in combat is that it seems that the slow-motion ability from previous Mass Effect games has been removed from Andromeda.

As for loadouts I’ve largely stuck with the tried-and-true combination of carrying an assault rifle and a sniper rifle, along with a SMG as a backup in case my assault rifle runs out of ammo. This is a fairly heavy setup for my character but I’ve invested the XP needed for me to carry those weapons and not penalize the recharge speed of my special abilities. Speaking of which, my preferred special abilities are all from the tech category. Right now I’m using the tactical cloak, remote turret, and Remnant VI. This has proven to be a very effective combination, as the turret and VI practically give me two additional allies on the field of battle and the cloak both allows me to flank enemies undetected and escape hairy situations.

Your ship, the Tempest

Driving around in the Nomad

Outside of combat and traversal, Andromeda has quite a few quality of life improvements over its predecessors. A lot of mundane things like selling salvage, managing APEX teams and AVP, research and development, etc. can be done quickly from inside the Tempest and this saves you time that would otherwise have to spent on returning to one of the game’s hubs. The remote vendor kiosk on the Tempest also doesn’t appear to have a price penalty like the one that you could use on the Normandy.

More nice touches are found during the time spent exploring. In space you fly between planets and other locales in first-person, which makes you feel like you’re piloting the ship (these animations can be skipped if you don’t care for them). On the ground you get banter between your team as you drive around in the Nomad. In previous Mass Effect games there were scattered bits of interaction between the members of your team but in Andromeda there are a lot more and consequently you get a much greater insight into both your individual squadmates and how they relate to each other.

In my previous post I had mentioned that a particular squadmate’s AI was getting them wounded in battle frequently. Since then this problem has disappeared so I’m willing to let that previous grievance go and just say it was a fluke. At the same time I’m pleased to report that the krogan squadmate that you gain acts exactly the way you would think a krogan would. He charges straight into every fight, bum rushes enemies to either blast them at close range with his shotgun or strike them with a melee, and he does it all while shouting like a barbarian berserker. We’ve had krogan squadmates in previous Mass Effect games but this is the first time where a krogan’s AI has perfectly matched the way the game portrays their behavior in battle.

Another thing to update from the previous post is my note about apparently not being able to save during main missions. I’ve confirmed this to be true, and while most of the time it’s not a problem it can certainly be a big problem. At one point in a main mission I was making my way through a facility and got to a point where I had two doors to choose from. The one I picked triggered a cutscene and when the cutscene ended I couldn’t go back, which really upset me. In the time after that, however, I discovered a workaround for this issue in that the game keeps your last few autosaves in the menu so you can use those to go back if you make a mistake or get immediate buyer’s remorse after a hard story decision. 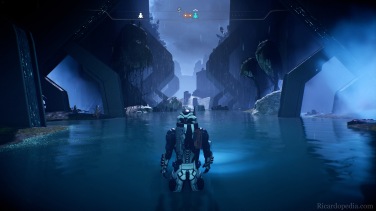 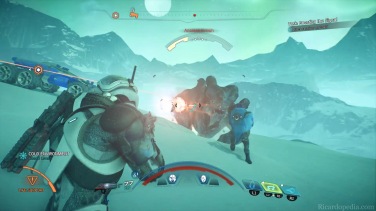 Attacked by a large beast

Sunset on an alien world

Having said that, I personally have only experienced one story decision that I found to be tough, and I think the reason why I’ve mostly not agonized over decisions is because I know the next Mass Effect game could be a long ways away, or might not even happen at all. Your choices in Andromeda have consequences, but they don’t feel quite as impactful when there’s a chance you’ll never see their final outcome.

What’s more impactful (for me) than the choices in Andromeda are the bugs that continue to rear their ugly heads. I listed a number of the game’s issues in my last post and since then I’ve encountered more. None of these are game-breaking but they certainly don’t make the game look good. In some conversations NPC voices are muffled even when Ryder is standing close and facing them, and Ryder’s neck will sometimes twist around in horrific fashion when talking to people (this neck twisting was also a problem in previous Mass Effect games). Once I encountered NPCs who were completely invisible or simply failed to load. I could hear them talking but there was no one around. On a certain planet if you are running and come up to a set of stairs Ryder will bounce backwards instead of running up them. In combat there’s an annoying bug where my remote turret fails to deploy even when I throw it on level ground. I’ve also had two instances where (human) enemies came popping out of the ground like a thresher maw. On top of all this there have been multiple times where the game froze on me for about five to ten seconds. Thankfully none of these times were the game actually crashing on me, but it does seem like I’ve come close to the brink.

The non-liner nature of Andromeda can also result in some strange things that aren’t really bugs but are just weird. For example, I made a decision that really pissed off one member of my team, however when I visited the character immediately after the mission on the Tempest he wasn’t pissed and I got a major character building moment where I learned about his past. At the end of the scene he walks out and a few minutes later I talked to him again at his normal spot on the Tempest but he was now angry because of what I had done on the mission (like the anger was briefly forgotten but then caught up to him). Not long after that I returned to the Nexus and because I had done something he liked (farther back than the thing he didn’t like) I got a character moment where everything between us seemed to be fine. Again, this series of events was just the result of the order in which I had played the game, but if I didn’t know any better I would think that this member of my team was bi-polar or something. 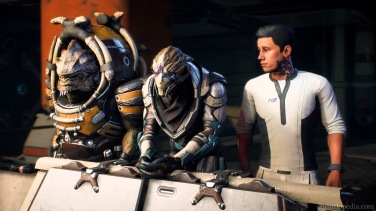 Hanging out with some of your crew 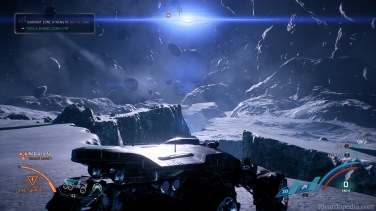 As of the time that I’m writing today’s post I’m closing in on the end and I hope to finish Andromeda within the next two weeks. If I were to rate Andromeda now I think I’d give it somewhere around a 7.0 to a 7.5 out of 10, which is slightly lower than the score I was thinking about in my last post. At this point Andromeda is starting to drag on me and I just want to finish it. That will mean leaving a small number of side missions unfinished, but I’m ready to make the final push to the end. Hopefully around the end of September or early October I’ll be ready to give my final verdict.