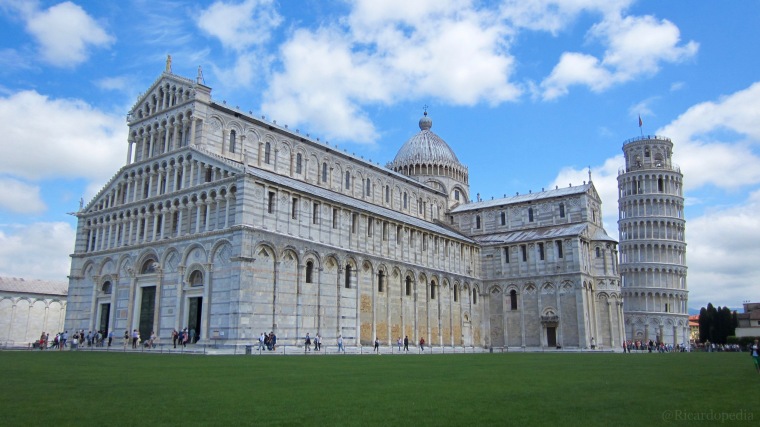 I had some extra time while I was in Florence, Italy, so I decided to pay a visit to the town of Pisa to see it’s famed Leaning Tower. Pisa is about 40 miles west of Florence and can be easily reached from Florence by train or bus. I arrived in Pisa by train and after exiting the train station I walked north for about 20 minutes until I came to Piazza del Duomo where the tower is located. Piazza del Duomo is also known as Piazza Dei Miracoli, or “Field of Miracles.” 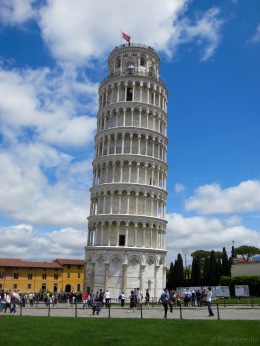 The Leaning Tower is Pisa’s most famous landmark and probably the main reason that people visit the city. Its famous tilt comes from the fact that some of the ground underneath it was not firm enough to properly support the tower and according what I’ve read online the tilting was visible while the tower was still under construction in the 12th through 14th centuries. Thanks to stabilization efforts that began in the 1990s the tower has been slightly straightened and is not in imminent danger of falling over. Today the Leaning Tower is open to the public and you can climb to the top of it if you like, though when I visited in 2012 I chose not to do so. When I’m back in Italy later this year there’s a chance I’ll have time to do another day trip to Pisa and if I do then maybe I’ll go up and get some photos from the top of the tower. In the meantime, enjoy the bonus photo of the tower on the right. It captures the angle of the tilt a bit better than the photo across the top of today’s post.

Right next to the Leaning Tower are Pisa’s other two main sightseeing attractions: the city cathedral and baptistery. Today’s photo only shows the Leaning Tower and the cathedral but if you were standing where I was when I took the shot you’d see the baptistery if you looked just slightly to the left. The cathedral’s Romanesque architecture and plain white exterior make it stand out from other major cathedrals in Italy like the ones in Siena, Florence, or Venice. If I remember correctly, back in 2012 you could enter the cathedral for free, but you had to reserve an entry time in advance. If you’re visiting Pisa in the near future it’s probably best to go online and see about getting tickets to the Leaning Tower, cathedral, and/or baptistery in advance, especially if you’re going to be there during peak tourism season.

Oh, I almost forgot the fourth major sight at the Field of Miracles: all the tourists posing photos like they’re pushing over the Leaning Tower. No tickets needed for that show.