Is it a crime to visit Europe and not go to Spain? I jokingly asked a friend that question a few years back and we both agreed that it was. If that’s true then I’m about to become a criminal next month since I’ll be in Europe but not setting foot in Spain while I’m there.

The reason I bring up Spain is because on Facebook I’ve been getting those Memories posts on my timeline where they show photos I published on the same day in years past. Exactly three years ago I was in Spain, and on today’s date I was in Seville, specifically. Spain is my overall favorite nation in Europe and when I see these photos I can’t help but think back to the two previous times I was there, in 2012 and 2015. A lot of good travel memories come from Spain, be it basking on the beaches of San Sebastian, taking in the sunset at Tarifa, looking for my friend Ben’s bench in Salamanca, devouring churros con chocolate in Madrid, or exploring the Alhambra in Granada, among many others. On the wall above my desk I still have my old rail map of Europe and I’ve caught myself staring at it lately, specifically at Spain, and I’ve brainstormed potential future journeys around the country. Any future trip to Spain can’t happen until next year at the soonest, and both Japan and South Korea currently have a higher slot in my travel index, but at some point in the future I will go back.

For those that have never been to Spain, below is a small assortment of photos from when I was last there in 2015. Obviously such a small collection doesn’t capture even a tiny fraction of what Spain looks like but hopefully it gives you an idea of the things I saw and did there. Enjoy.

One of the beaches in San Sebastian 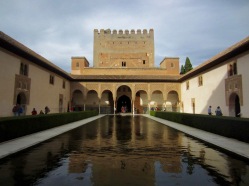 The Alhambra Palace in Granada 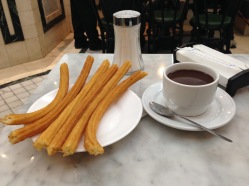 The old Roman aqueduct in Segovia