Like many people, I had my first experience playing Tetris came when I was child. My father’s computer had a version of the game and I vaguely remember messing around with it on occasion. Back then Tetris games had no flair and all my childhood self saw was just an endless series of falling gray objects. In the years since then I very rarely played Tetris and even though I grew to appreciate just how timeless of a game it is and how important it was to video game history I never saw myself being interested in Tetris in any substantial way.

That all changed two weekends ago when I played the demo for Tetris Effect, a new version of Tetris that is now available for purchase on PlayStation. I had read about Tetris Effect online a while ago and it sounded interesting enough for me to download it and give it a try. What I expected was Tetris with some flashy colors; what I got was one of the trippiest game demos I’ve ever played. Today I’ll try my best to describe Tetris Effect and I’ve got some screenshots to share with you, though I must concede these screenshots don’t really do the game justice.

Whales? What is this, Star Trek IV?

Slowly ramping up the speed.

Tetris Effect takes the Tetris that you know and drops it into a vat of hallucinogenic acid. The setup is still the same as always with you arranging falling blocks, called tetrominos, so that you create full rows with no gaps. Each full row you create is cleared and earns you points but if your board fills up with tetrominos so that they touch the top of the board then it’s game over. Tetris Effect throws into this formula an explosion of color and background art, along with some great music. As you’re maneuvering tetrominos on the board you’ll have whales and manta rays gently gliding across your screen one minute and then Egyptian hieroglyphics will start appearing in another, all while a fitting musical beat either caresses or excites your eardrums. All the dynamic background art can be distracting at times, and it sort of reminds me of playing Guitar Hero in that sense, but with some practice you can learn to take it all in while still keeping your focus on the board.

Depending on what game mode you’re playing, Tetris Effect can also throw in a few game modifiers. The game’s speed may increase or decrease, your point of view can be altered, and giant tetrominos may appear, among other things. Another little twist is the Zone mechanic, which can be activated after filling up a gauge by clearing rows. Going into the Zone stops time and lets you clear rows for extra points, which can be useful to max out your score and/or get you out of a tough spots. Tetris Effect can be legitimately hard at times, and anyone who’s played any version of Tetris knows that a single mistake can leave you scrambling just to stay alive, so having the Zone as an emergency backup is a welcome addition to the game.

In terms of game modes, Tetris Effect can be played in two different ways. The first is Journey, which is Tetris Effect’s version of a main campaign and has you playing across connected boards. You’ll know you’ve transitioned to a new board when the colors, background art, and music change and the transitions are very smooth. The second game mode is called Effects and lets you try your hand at a variety challenges such as clearing a set number of rows while the game’s speed steadily ramps up. The vast majority of those challenge modes were locked in the Tetris Effect demo but it looked there were quite a few to choose from in the menu. 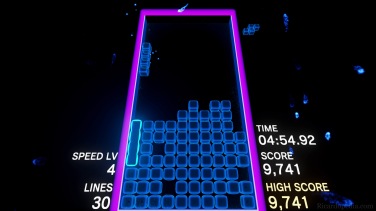 One gameplay modifier zooms in your view of the board. 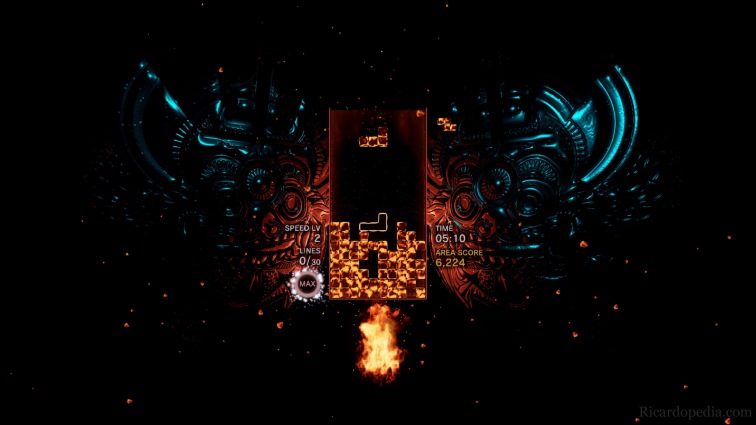 At the end here I should note that I played the Tetris Effect demo on my TV and it was a cool experience but from what I’ve read online the definitive way to play this game is with a PSVR headset. I’ve never used psychedelic drugs before but I imagine playing Tetris Effect with the PSVR headset is probably about as close as you can get to experiencing what it’s like to take LSD without actually taking LSD.

With the upcoming holiday season and my trip to Italy around the corner I don’t see myself purchasing Tetris Effect anytime soon but if I do get around to purchasing the whole game I’ll publish some sort of follow-up to this post. In the meantime, if what I’ve described sounds interesting I’d suggest you go on Youtube and watch a video or two of Tetris Effect to better appreciate what this game has to offer.