Welcome to Late to the Party, a series in which I discuss video games that I’ve finally gotten around to playing. Today I’m going to talk about Steep, an extreme sports game. I played Steep on a PlayStation 4 Pro but I only messed around with it for about 3 hours so today’s writing piece is just some brief impressions of the game. Because I did not play the game to completion today’s post will not include a final score.

Steep takes place during the winter up in the highest mountains of the European Alps. You play as an extreme sports enthusiast but there’s not much of a story in the game. For a game like Steep this is totally fine since you’re just roaming around the mountains to try your hand at various challenges and fitting a story into the experience would probably feel very unnatural.

From the short time I put into Steep I participated in three different sports: skiing or snowboarding down the mountains, parachute gliding through the skies, and flying just above the ground at high speed in a wingsuit. Steep has a cool feature in that your character has the ability to switch between all of your equipment on the fly, so you can go off a big jump on your skis and while in the air immediately switch to your wingsuit or parachute. You can also freeroam around the mountains and discover new drop zones and other things if you want to go beyond all the preset activities the game has for you.

In terms of gameplay I don’t have any problems to report. Everything works well and I appreciate that Steep makes it easy for you to perform tricks when you’re doing jumps on skis or snowboards. The one thing that took me some time to get accustomed to was switching stances while skiing and consequently I found myself using the snowboard more often than the skis. Wingsuit activities were probably my favorite of all the things I did in Steep, though my tendency to try to stay as low to the ground as possible meant my character suffered innumerable horrific crashes. By comparison, gliding around in the parachute felt like a relaxing bit of sightseeing through the mountains.

Speeding down the mountain on a snowboard

Wingsuit activities are all about narrowly dodging death. 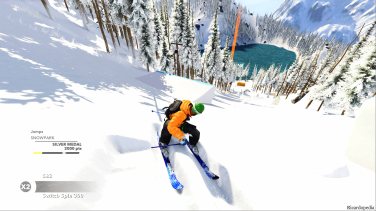 Visually, Steep looks good though it’s not going to blow anyone away with its graphics. Notable environmental pop-in can occur while gliding around in your parachute and sometimes the mountain map can be slow to load but otherwise I didn’t encounter any significant visual bugs during my time with the game. Audio in Steep is solid and the game’s soundtrack has some catchy tunes for you to listen to while shredding the gnar.

Overall I’m pretty positive on Steep. I’m personally not into extreme sports games (or sports games in general) and I don’t see myself coming back to Steep in the future but if you like these sorts of games it’s something I’d suggest you give a try.