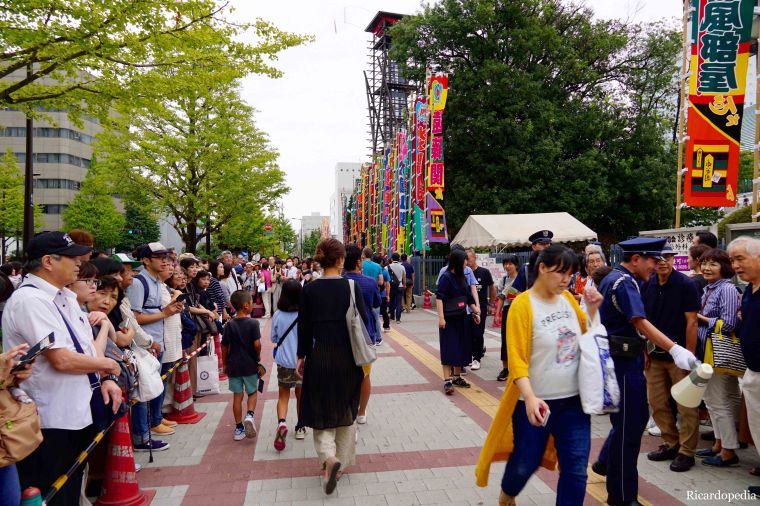 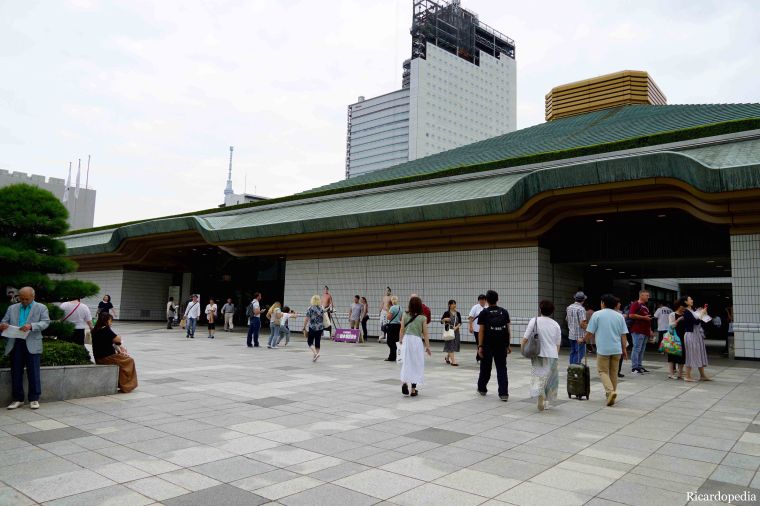 I got back to the sumo arena just after 2:00pm and by then it was a completely different scene than what it had been earlier in the day. Crowds of people were now standing around outside, waiting for a chance to see the wrestlers as they arrived. On my hand was an infrared stamp that the staff had given me when I first departed the arena in the morning and once it got checked I headed inside. 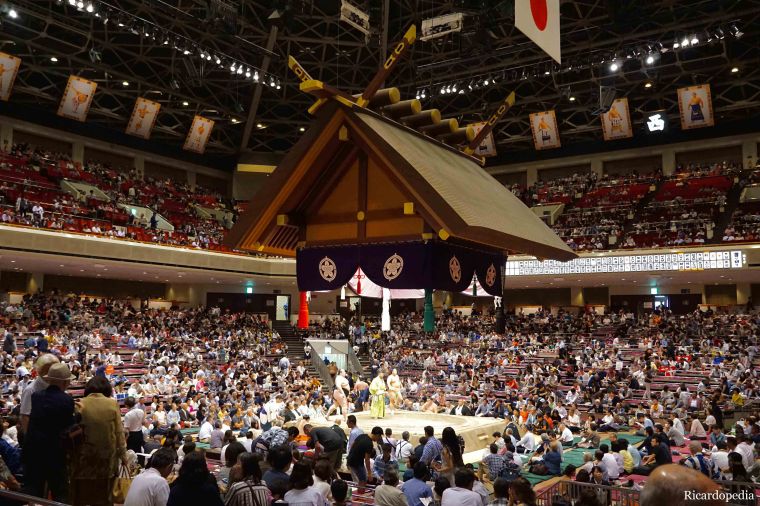 The ushers were now checking tickets, so I’d now have to sit in my actual seat; unlike in the morning when I could sit wherever I wanted. I had a mat inside the box seating area on the lower level, about halfway back from the wrestling platform, and I’d be sharing the box with three other people. It got a little cramped at times but I didn’t mind. I chatted with the other people in the box all through the afternoon and evening, and we had fun trying to guess which wrestler would win each match. The one major downside to my seat is that I’d had a lot of people in front of me, so photographing the sumo matches was tricky. 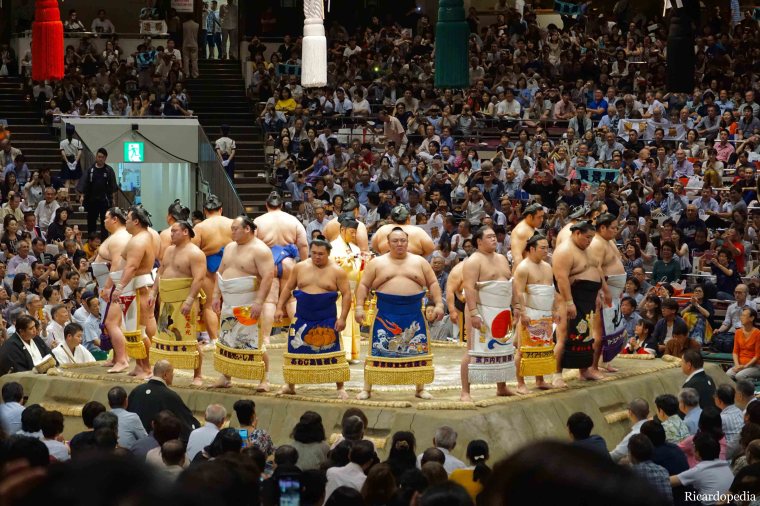 After several matches the upper-tier wrestlers came out to be introduced to the crowd. They came out in two separate groups and all of them were wearing their ceremonial aprons. Each group performed a brief ceremony after being introduced and then they returned to their waiting area in the back. Once both groups were introduced a final ceremony happened in which a top-ranked wrestler (called a yokozuna) with a heavy braided rope around his waist performed ritual motions to drive away evil spirits. 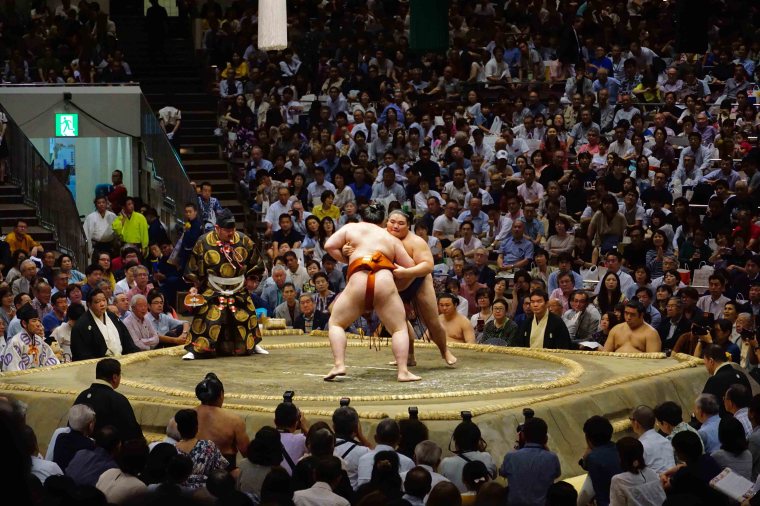 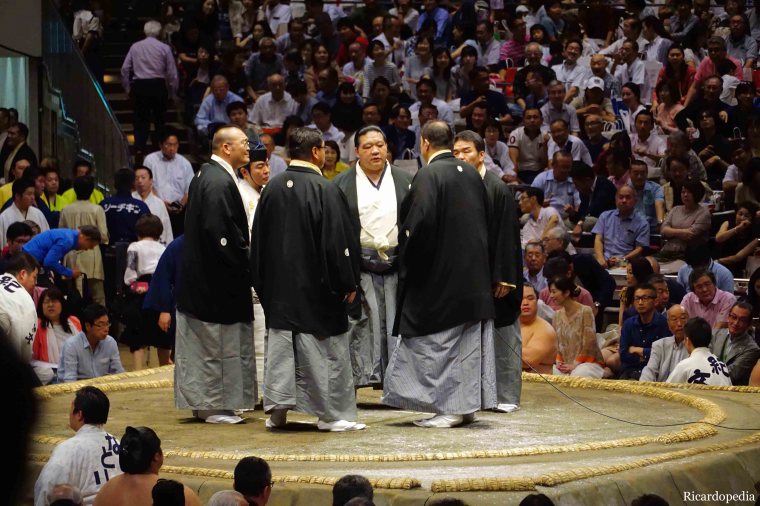 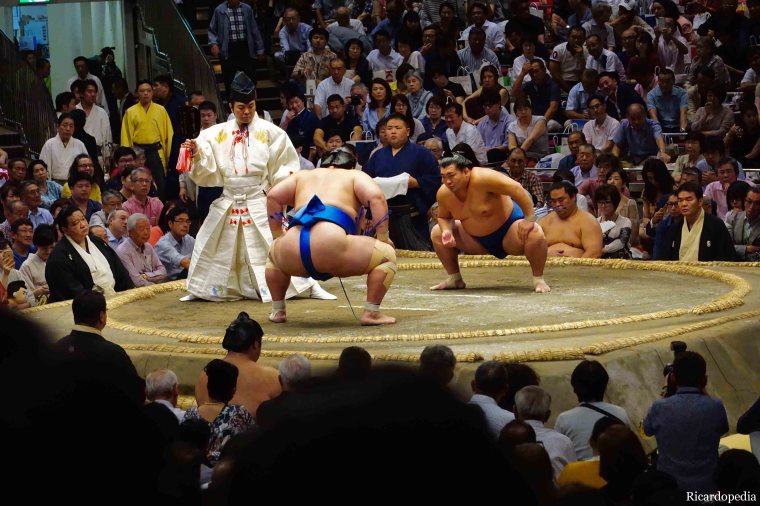 With all of that pomp and circumstance out of the way, it was time for the final twenty or so matches of the evening. These were the main events of the day’s tournament and the crowd was hyped for each of them. Certain wrestlers seemed to have their own cheering sections that erupted when they walked up onto the platform. I remember there were a lot of closely contested matches that night, and one took the record for the shortest bout I’ve ever seen, with one wrestler winning almost instantly by simply dodging his opponent and letting him fall to the floor at the start of the match. A number of matches were preceded by a parade of banners from various sponsors, and for these matches there was a cash prize given to the winner. One match had a really close call that required the five referees dressed in black to come onto the platform and make a judgment. There’s no instant-replay in sumo, so these five guys sit around the wrestling platform and are called up whenever the main referee isn’t sure who won the match or if he makes a questionable decision. In this case, I remember the black referees decided for the two wrestlers to simply fight again to determine the winner. At the end of the evening one of the wrestlers came back out and performed a ceremonial dance with a bow and then the day’s tournament came to an end. 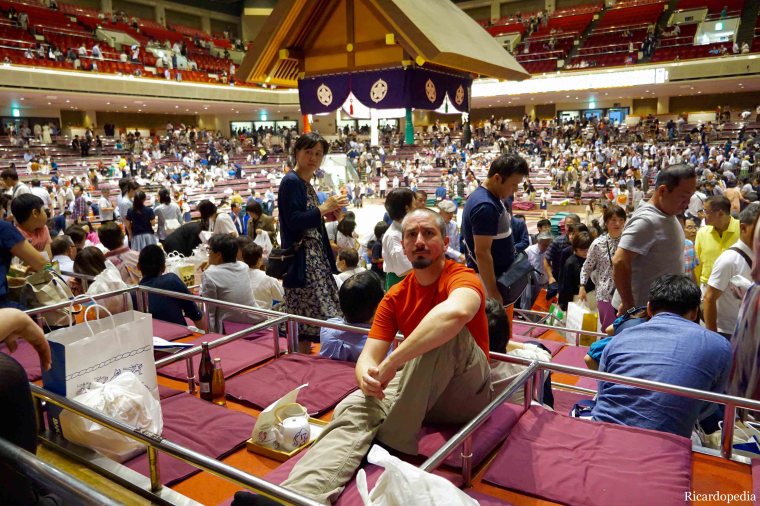 Immediately after this people started clearing out and the arena staff covered over the wrestling platform. Before I left I had one of the people I was sitting with get a photo of me. I’m not a sumo fan, but I’ve attended the national sumo tournament on both of my trips to Japan and both times I’ve thoroughly enjoyed myself. Tickets to the tournament aren’t cheap, but for me at least it’s always been money well spent.