Welcome to Late to the Party, a series in which I discuss video games that I’ve finally gotten around to playing. Today I’m going to talk about Tetris Effect, a recent incarnation of one of the most iconic games of all time. I played Tetris Effect back in February on a PlayStation 4 Pro and I played it without a PSVR headset.

I remember my first time playing Tetris was when I was very young. My father’s computer had a version of the original Tetris and I messed around with it for a few minutes before trying out some other games. While the experience was somewhat novel I quickly lost interest, and in the years after that first play session I never made an effort to give Tetris a serious try, even as many different versions of the game came out and as I gained an appreciation for just how important Tetris was in the history of video games.

All of that changed this year, however, when I decided to get my hands on Tetris Effect. I had seen trailers for the game and I was intrigued enough to check out this most recent iteration of Tetris. Memories of the original Tetris and its falling gray blocks came flooding back as I loaded Tetris Effect for the first time, and I admit part of me was a bit skeptical on whether Tetris Effect could hook me or not.

My skepticism came to a very quick end upon starting up Tetris Effect. Seriously, Tetris has come a long way since that first time I played it. I think the experience I had with Tetris Effect is somewhat similar to a person going from an old flip phone to a modern smart phone. While the basic formula of Tetris remains the same—arrange falling shapes, called Tetrominoes, in such a way to completely fill up rows and thus clear the rows from the screen—Tetris Effect adds in innovations that have been made over the preceding years along with some new tricks of its own.

The new features are really what make Tetris Effect special, and indeed mesmerizing. While playing the game Tetris Effect treats you to some extraordinary background art and a great soundtrack, both of which dynamically change as you make progress on the stage you’re playing. Moving and placing the Tetrominoes creates sound effects that compliment the music and visuals, and the new Zone mechanic lets you briefly stop time and clear rows for massive score bonuses. I don’t own a PSVR headset, but I kind of wish I did just so that I could use it on this game because I imagine that Tetris Effect in VR is pretty close to being on LSD without actually consuming any psychedelics.

Tetris on the Moon 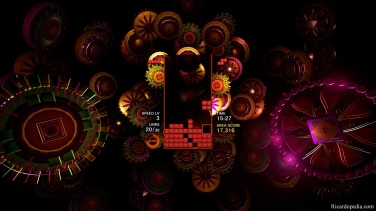 Sometimes the background visuals can be a little distracting

Bringing peace to the forest via Tetris

After completing Tetris Effect’s tutorial—which is very useful for less experienced players like me—you can choose from the game’s two main ways to play: Journey Mode and Effects Mode. Of the two I’d recommend first completing Journey Mode, which is Tetris Effect’s version of a campaign and tasks you with playing through each of the game’s 29 stages. Not all of the stages are winners but the vast majority of them are good. Journey Mode will take most players about 2-4 hours to complete, though be warned, the final stage of Journey Mode is no joke, even on easy difficulty (the trick, as I found it, is to make full use of spinning the Tetrominoes in order to buy an extra second to position them). Completing Journey Mode is well worth the effort, since doing so unlocks Theater Mode that allows you to enjoy the game’s art and music on their own without any gameplay to distract you.

Effects Mode offers a wide variety of gameplay modifiers to test your skills against. Some of the individual modes just alter the speed of the game while others challenge you to things like earning All Clears, eliminating dark blocks, and getting high scores within a time limit. For me, Tetris Effect is at its most enjoyable when I can just relax and zen out, so I personally prefer the modes where I can keep the speed low and gently flow with the audio-visual journey that the game takes you on.

Even with all the novel quirks that Tetris Effect brings to the table, it’s still fundamentally Tetris, so if you have some sort of dislike of Tetris then this version probably won’t win you over, though I’d still encourage you to give it a try. Tetris Effect is also the sort of game where its lifespan can vary dramatically from person to person. Some people might get a few days out of Tetris Effect and be done with it while others could play it off-and-on for weeks or months or longer.

Tetris Effect took an old game that I never thought I’d put much time into and plunged it into a sea of pure enchantment, creating what is so far my biggest surprise in gaming for the year 2020. I’m going to score Tetris Effect at a 9.0 out of 10. It may not be a game that keeps you for a long time, but Tetris Effect is the gaming equivalent of an acid trip and is very powerful for as long as it lasts.