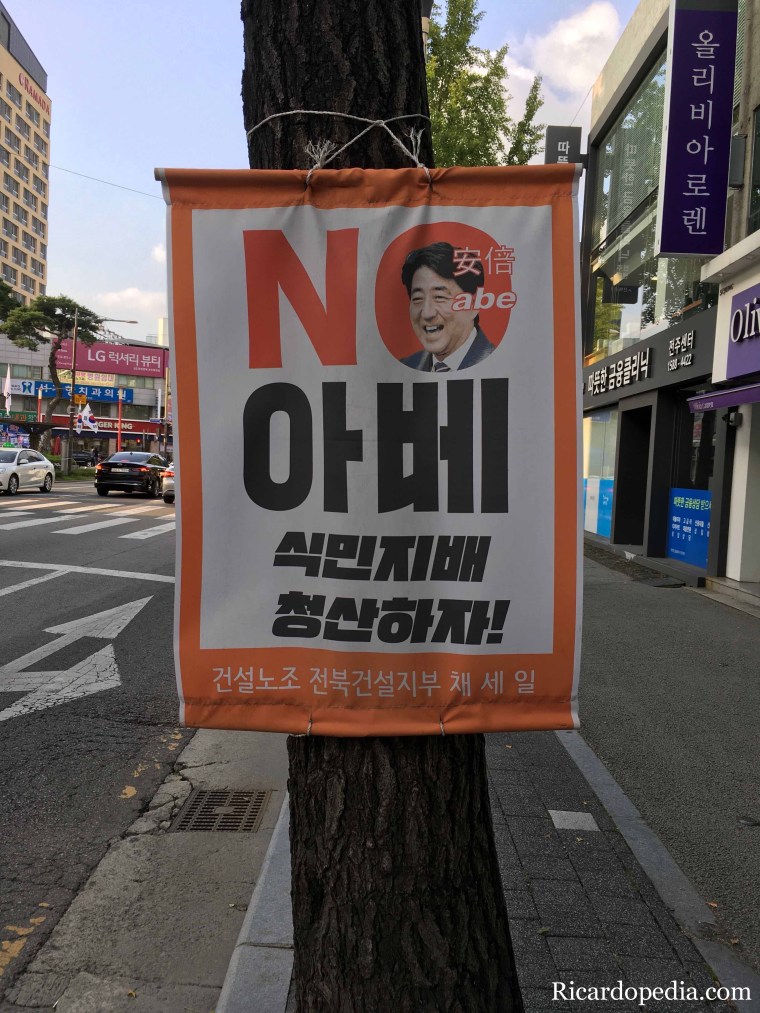 While walking around Jeonju I saw quite a few anti-Japanese signs like the one today’s post. As some of you may know, Japan and Korea haven’t always had the most amicable of relationships and there’s a lot of bad blood between them that stems from Japan’s occupation of Korea in the 1900s. Some Koreans do not believe Japan has done enough to atone for its deeds and from time to time there are flare-ups of anti-Japanese sentiment in Korea. When I was visiting Korea there was an ongoing trade dispute between the two nations and Japan had recently imposed restrictions on Korean exports. In addition to the “No Abe” signs like the one above (Shinzo Abe was the Prime Minister of Japan at the time) there were also “Boycott Japan” signs on various buildings around Jeonju and on Japanese restaurants there were signs stating that all their food was of Korean origin. Jeonju wasn’t the only town I saw these sorts of signs in, though I don’t remember seeing any anti-Japanese signs in either Seoul or Busan. It may be that anti-Japanese feelings are stronger outside of Korea’s largest cities, or perhaps the city councils of Seoul and Busan don’t want to risk losing business from Japanese corporations and consumers.

Interestingly, when I was in Japan I asked a few Japanese people for their perspective on Japanese-Korean relations and they all gave the same answer. Every single one of them said that the Koreans were being “too emotional”. It would seem that the Japanese think the Koreans are clinging too tightly to injustices from 100 years ago while the Koreans think the Japanese are living in denial of the past.