We’re getting close to E3 2016, the annual video games convention held in Los Angeles. That means we’re about to get a bunch of previews for games that will be coming out either this year or in 2017, and in that spirit I thought I’d dedicate this week to highlighting several of the games I’m personally looking forward to. Each day I’ll feature two games and a short description of what they are and why I’m interested in them.

To wrap up this short series of blog posts, today I present to you an intergalactic space opera, and a story about a boy and his oversized bird-dog creature. 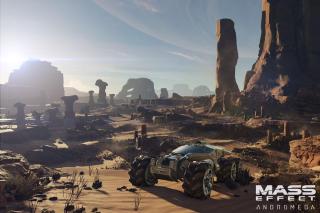 The Mass Effect games were some of my favorite ones from the PlayStation 3/Xbox 360 console generation, so it’s no surprise that Mass Effect Andromeda is near the top of the games I’m looking forward to. Though there have been a few press releases and leaks since its announcement, we don’t know too much about Mass Effect Andromeda, other than that it takes place in a different galaxy and its story comes after the events of Mass Effect 3. Because of this, I’m very interested to see what was decided as the canon ending of Mass Effect 3. For those that don’t know, there was quite the controversy when Mass Effect 3 came out, as there were only four endings and these endings seemed to nullify the importance of all the choices players had made leading up to them. While I wasn’t one of the people who was up in arms about Mass Effect 3’s ending, I do concede that it could have been much better and I’m hopeful that developer Bioware will take the hard lessons learned from it and uses them to make Mass Effect Andromeda better.

No other game on this list has caused me as much mental grief as The Last Guardian. I played and loved its two predecessors, Ico and Shadow of the Colossus, and when The Last Guardian first was announced in 2009 for the PlayStation 3 I was on top of the world with anticipation. But then the game fell into development hell. Year after year, there were rumors of its reemergence, and year after year it was a no-show. All the news related to the game sounded bad, with talk of the development team having major hardware difficulties and game director Fumito Ueda leaving Sony (though still working on the game as a creative consultant). I confess I had just about given up on The Last Guardian by the time it was formally re-revealed in 2015. Part of me will remain pessimistic and not believe this game actually exists until I have it in my hands, but now the end finally seems to be in sight. The Last Guardian is scheduled to come out this year, but whenever it comes out I’ll finally get to play the game that mesmerized me all those years ago with its tale of a boy and his giant chimera creature. Hopefully it’s been worth the wait.