A decent-sized ruckus erupted recently when Bethesda, the publisher of such notable games as Dishonored, Fallout, Doom, and Skyrim, published a blog post stating that they would not be sending out advanced copies of their next two games to the media. It’s a very short post that only takes a minute to read, and I’ve included a screenshot of it below for those who are curious about it. 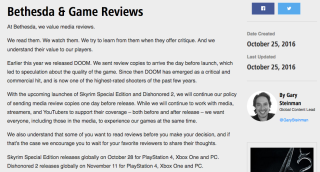 As you can see, Bethesda cites the release of Doom earlier this year as an impetus for this new policy. Copies of Doom got to reviewers one day prior to the game’s launch, which in today’s gaming world is often a sign that a publisher knows a game isn’t that great and is trying to delay the release of negative reviews in order to keep people from cancelling their preorders, but Doom bucked the trend and was very well received by most of the games media. With a precedent now created, Bethesda will repeat what they did with Doom with the upcoming releases of Skyrim Special Edition and Dishonored 2, and it seems safe to assume Bethesda will continue this policy with other future games. For those who want to read reviews before deciding whether or not to buy a game, Bethesda encourages them to just wait for their favorite reviewer(s) to chime in after a game’s launch.

For me, this is a complete non-issue. Bethesda’s lineup of games has never appealed to me, and as such I don’t play them to begin with. Also, it’s rare for me to play games close to their initial release dates, (hence the existence of my Late to the Party series of writing pieces) so even if I did play a Bethesda game, it would be after the games media finally published their reviews anyway.

As for the general consumer, this may or may not be something to get worked up about. The people who for whatever reason feel the need to play a game at launch will be jumping in with less information than before, and will have more chances to get burned by a bad game. People who are ok waiting a few extra days for reviews to start coming out will dodge those landmines at the expense of getting in on the conversation a little late. Since games are not perishable goods that will spoil if you don’t consume them right away, and since no one is going to die if they slightly postpone a purchasing decision, I personally think the average consumer should just take Bethesda’s advice and wait for their favorite reviewers to give their input.

The people for whom this is definitely a big deal, however, are the games media, youtubers, and others who make a living off of reviewing and discussing games right when they come out. For many of them their business is at least partially dependent on publishing reviews as close to a game’s launch as possible, (ideally they’d have a review online before a game comes out) and, generally speaking, the closer to launch the review comes out, the more web traffic, and thus revenue, it tends to generate. Now that they are no longer getting early copies of Bethesda games there is a new challenge to their business model, and they are understandably upset. Were I in their shoes I wouldn’t be too happy either, as I’d now be under tremendous pressure to review a game as fast as possible to keep from falling behind everyone else, and in doing so I might publish a review of lesser quality than what I’d normally produce. Unfortunately for the games media and others, there is little they can do about Bethesda’s decision, so they will just have to deal with it.