I love video games, but it’s rare for me to play them right when they are first released. Normally it takes me a somewhere from a few months to a few years to get around to playing to a game. I’ve got a considerable backlog of games that I’ve been meaning to play and it hasn’t been until recently that I’ve been able to start chipping away at the list. With that in mind, I’ve created a series of posts called Late to the Party, wherein I discuss the games that came out in the preceding years that I’m finally getting around to experiencing. Today’s entry in the series is LEGO Star Wars: The Force Awakens, referred to hereafter as just The Force Awakens.

Similar to my experience with Ratchet and Clank, The Force Awakens is the first LEGO game that I’ve played in its entirety, despite the fact that LEGO games have been around since 1995, and licensed LEGO games starting coming out in 2001. There had been demos of LEGO games that I had played, and a brief session or two with one of the previous LEGO Star Wars games that I had experienced beforehand, but never had I worked through a LEGO game from start to finish. Seeing as how I loved playing with LEGOs when I was young, I figured that I ought to at least complete one LEGO game in my lifetime, and now that checkbox has finally been filled in.

As the name suggests, The Force Awakens is based off the Star Wars movie of the same name. Seeing as how just about everyone has watched the movie at this point, I’m not going to worry about spoilers in this post. If you’ve seen the movie, you know exactly what’s going to happen in the game’s main story, with the exceptions being the changes and additions that have been made for the sake of gameplay, as well as the signature humor and family-friendly nature the Lego games are known for. At the start of the game you’re given a tutorial prologue which takes you back one movie in the Star Wars saga to Episode 6, where you play through the Battle of Endor. After that the game skips forward to the events of Episode 7 and you romp across the galaxy, reliving the adventures of Rey, Finn, Poe, and others. All the major plot points from the movie are in the game, and everything is neatly divided up into ten chapters, plus the prologue and epilogue, that each take about twenty to forty minutes to play through, depending on how fast you’re moving. In addition to the main plot from the movie, there are also unlockable bonus missions add new bits and pieces to the story and characters from the movie. These extra missions tell the tales like how Han and Chewie captured the Rathtars, but I don’t know if they’re considered canon or not. The main story ends exactly where the movie does, with Rey meeting Luke, and overall I’d say the game is a faithful adaption of the movie.

Infiltrating the Starkiller base

The gameplay of The Force Awakens is very straightforward, as one might expect of what could be construed as a kids game. You run around as part of a small group of LEGO characters, smashing objects to collect LEGO studs that serve as the game’s currency, punching stormtroopers, and solving simple puzzles. Different characters have different weapons and abilities, such as Chewie’s thermal detonators, Rey’s wall running, and Finn’s gas mask, and you’ll need these to progress through the levels. You can cycle between controlling different characters with a single button press, and when you change characters during puzzles the game will normally immediately switch you to the character you need to be using. At multiple points the game changes into a cover-based shooter, where you get behind a piece of cover and blast your way through waves of stormtroopers. These moments are mechanically not as strong as what you would find in games like Gears of War or Uncharted, but they work well enough and don’t last so long that you get tired of them. There are also has some impressive sequences where you pilot an X-Wing or another craft and dogfight with TIE Fighters in the sky and outer space. Unsurprisingly, The Force Awakens is a very easy game overall, and there’s no real way to fail it since you respawn immediately upon dying, with the only penalty being that you lose some of your LEGO studs. The only times you will get stuck are when you reach an area where you’re not sure what you need to do and end up spending a minute or two figuring out the path forward. After completing a story chapter, you can replay it in Free Play mode, which allows you to use any characters you’ve unlocked in the game, and this is something you will need to do to grab all of the collectibles, as many require particular characters in order to obtain them. Individual worlds also open up as you progress through The Force Awakens, with many having hubs in which you can take on miscellaneous side quests and earn rewards. 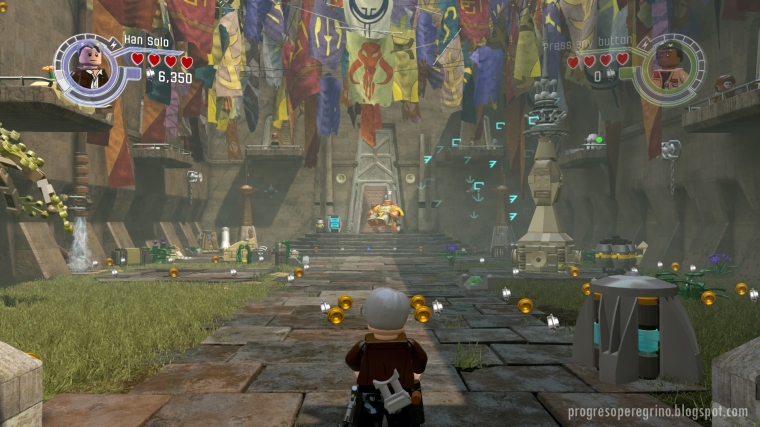 Being a LEGO game, the visuals of The Force Awakens aren’t going to blow anyone’s mind, but it does look exactly the way you would think it ought to. All structures, environmental objects, plants, creatures, and vehicles, are made of LEGO bricks, and many can be destroyed and broken down into their individual pieces. It really is as if you’re playing with a gigantic LEGO set—the kind you could only fantasize about as a kid. The Force Awakens also runs very smoothly most of the time, with only a few small hiccups when tons of things are simultaneously exploding in a shower of bricks and studs. Audio is just as carefully constructed as the visuals, with everything in the game sounding like it does in the movie, and even the original actors from the movie reprise their roles for the new bits of dialogue that were created for the sake of the game.

Seriously, how is this game so epic? That was the recurring thought in my mind as I was playing The Force Awakens. Sure, it’s kid-friendly game and requires little effort to complete, but it’s still fun for an adult like me and captures the spirit of the grand adventure that is Star Wars, all while adding that distinct LEGO charm. Though it won’t win any awards for anything it does, The Force Awakens is an easy recommendation for families and anyone who likes more lighthearted Star Wars games.