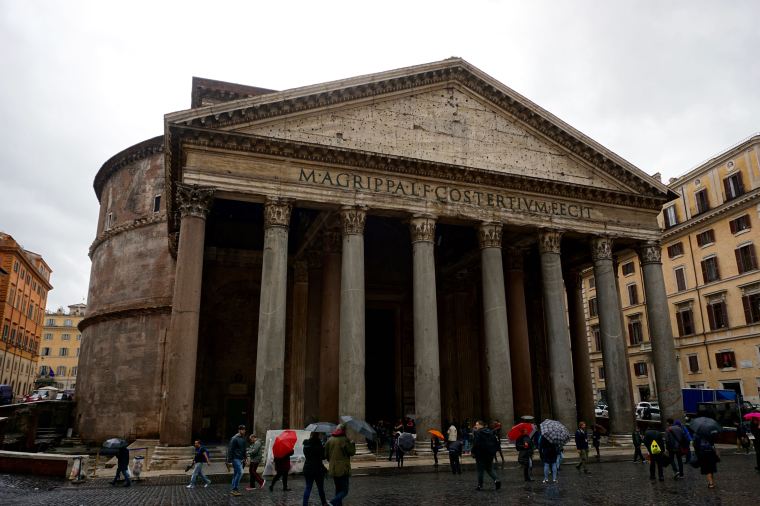 Almost in the very center of Rome is the Pantheon, one of the best-preserved Roman structures in Europe. The Pantheon was built on the site of an earlier temple in Rome and was dedicated to all the gods of the Roman Empire. It’s not certain exactly when the Pantheon was finished but it is believed to have been sometime around 120-126 AD during the reign of Emperor Hadrian. Atop the Pantheon is a concrete dome that remained the largest in the world until the Renaissance. A thirty-foot oculus in the center of the dome is the only source of outside light for the Pantheon’s interior, aside of course from the bit of light that can enter through the front doors. Whereas most Roman buildings have been ruined, destroyed, or remodeled over the past 2,000 years, the Pantheon has survived largely intact because it has been in continuous use since it was first built. In 609 AD the temple was officially converted to a Christian church and these days the Pantheon is still used for church services on Sundays but otherwise is primarily a tourist attraction.

My parents and I were spending a day walking around central Rome when we rounded a corner and came to the Pantheon. After getting a few photos of the exterior we walked into the portico to enter the building. As we did so we passed by the massive stone columns right outside the Pantheon’s front doors, each of which is a single, gigantic piece of granite that was quarried in Egypt and transported across the Mediterranean to Rome. Inside we took in the sight of the Pantheon’s incredibly preserved interior. Sure, some things have been added to it over the years such as the altar for church services and the tombs of a few famous Italians but otherwise what you see today is very close to what the Pantheon’s interior looked like when it was first built. Gazing upwards, you can see the coffering on the inside of the dome, which is a clever little design choice that both reduces the weight of the dome and serves as decorations. The oculus in the center of the dome is almost mesmerizing to look into, though you can’t stand directly underneath it as that part of the floor is roped off to visitors. You don’t need to spend a lot of time inside the Pantheon—my parents and I were there for about twenty-five minutes before moving on—but it’s definitely a top-tier attraction in Rome and we paid it a second visit when we returned to the city at the end of our trip.

As a little bonus for today, I’m adding two extra photos to today’s post. The one on the left is a view of the Pantheon’s interior and the one on the right is a photo looking up into the Pantheon’s dome. Clicking on the photos will expand them. Capturing the interior of the Pantheon on camera is really hard due to its round shape but I think this will give you a decent idea of what it looks like. 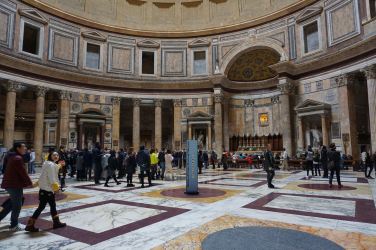