About a week ago I shared some photos I took when my parents and I crossed the Ponte Vecchio Bridge at night. I mentioned at the time that I was going to publish a second post on the Ponte Vecchio to tell the history of Italy’s most famous bridge and today I’ll be doing just that, as well as sharing a few more photos of it. While reviewing the photos I took last year I discovered that I didn’t have any decent ones from crossing the bridge during the day, so two of the photos below are actually from my 2015 visit to Florence. Those two photos were taken with an older camera and it will be obvious which ones they are.

The Ponte Vecchio that we see today is not the original bridge that spanned the Arno River at its location. It is believed that the first bridge was built during Roman times, though we don’t have any records to confirm the date of its construction. That first bridge was lost during a flood in 1117 and the bridge that replaced it was destroyed by another flood in 1333. In 1345 the Ponte Vecchio that we know today was finished and although it was damaged by yet another flood in 1966 it has thankfully never collapsed. During World War 2 all the other bridges in Florence were destroyed by the Germans to slow the advance of the Allied armies but the Ponte Vecchio was strangely left unmolested. Supposedly Hitler himself ordered that the bridge be spared however there’s no definitive proof of that.

Unlike the other bridges in Florence, the Ponte Vecchio is covered with shops. These days the stores on the Ponte Vecchio sell mostly jewelry but in the past you would have found a lot of shops belonging to butchers, tanners, and fish sellers on the bridge. Those businesses were booted from the bridge in the second half of the 16th Century to make the bridge nicer (and less smelly) and they were replaced by goldsmiths who have been doing business there ever since. It was also during this time that the covered walkway over the bridge was built. Called the Vasari Corridor, the walkway connected the Pitti Palace on the south side of the river with the city’s town hall at the Palazzo Vecchio on the north side and it allowed the Medici family to get from one place to the other without having to come into contact with the lower classes they ruled over. The Vasari Corridor is normally closed to visitors but I read online that it is scheduled to start receiving tourists in 2021. 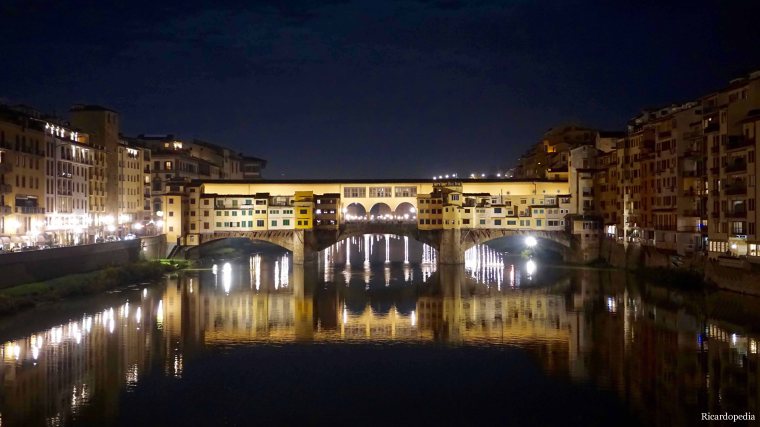