It’s time for the third installment in my series of itinerary ideas for my potential trip to Japan and Korea later this year. In today’s post I’ll be looking at Hokkaido, the northernmost of Japan’s main islands. In the map below Hokkaido is the region of at the top of Japan colored red. Two years ago in 2017 I saw a little bit of Hokkaido and if I’m able to return in 2019 I’m going to try to go deeper into the island. A special thanks has to be given to The Flying Tofu’s blog for inspiring me see more of this part of Japan. 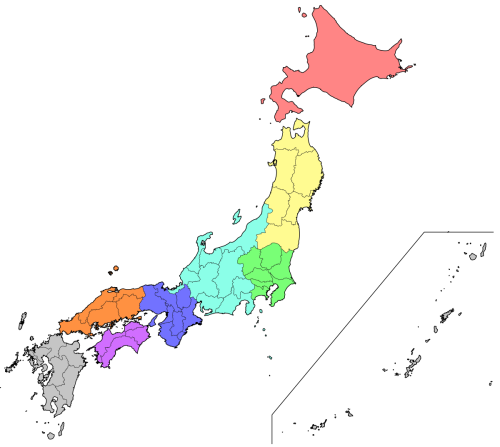 Hakodate will likely be my first stop in Hokkaido after crossing north from the Tohoku region of Japan. Back in 2017 I spent two nights in Hakodate and liked the town quite a bit, so a return visit is in order. I’ll probably only spend one or two days in Hakodate but while I’m there I’ll be sure to do a few things like eating squid sashimi at the morning market and going up Mt Hakodate for a view of the peninsula. Maybe I’ll even squeeze in another day trip to Onuma Park.

The capital of Hokkaido is a Japanese metropolis with a fairly Western feel to it, which is the result of Sapporo being a much younger city than its contemporaries to the south. When I was last in Hokkaido in 2017 I actually only saw a small part of Sapporo so if I return I’ll try to check out more of it. Moerenuma Park and Mount Moiwa are among the spots I’ll hope to see. Sapporo would also serve as the start and finish line of exploration deeper into Hokkaido (see next item) and when I finished with Hokkaido I’d likely fly from there over to Seoul in South Korea.

I’ve been thinking it might be good to rent a car in Sapporo and then spend 5-7 days driving around Hokkaido. While it is possible to get to a lot of locales by train or bus it seems like Hokkaido is the sort of place that might be better explored by car. I haven’t settled on an exact route around the island but I’d likely work my way north to the area around Wakkanai and then do a big loop around the island that eventually brings me back to Sapporo. This wouldn’t be my first time driving overseas but it would be my first time driving in Japan and I’d have to get used to being on the opposite side of the road as I do in America.