Welcome to Late to the Party, a series in which I discuss video games that I’ve finally gotten around to playing. Today I’m going to talk about LittleBigPlanet 3, a puzzle-platformer. I played LittleBigPlanet 3 on a PlayStation 4 Pro and today’s post will have an overall verdict but no final score.

LittleBigPlanet 3 is a puzzle-platformer where you guide your character, Sackboy or Sackgirl, from one end of a level to the other. The gameplay feels a little bit floaty compared to some other platformers like Mario but that’s how the LittleBigPlanet games have always been and it only took me a minute to adjust and become adept at running, jumping, grabbing, and all the other things you do in the game.

The notable additions to gameplay in LittleBigPlanet 3 are three new characters to play as, along some new gadgets you use to get through each level. Your new protagonists are named OddSock, Toggle, and Swoop, and each come with their own unique abilities. Oddsock can run along walls, Toggle can change sizes, and Swoop can fly. As for the gadgets, you’ll acquire five over the course of the game, including one that allows you to slide along overhanging rails and another that gives you the ability to double-jump. All of these new features integrate extremely well into the LittleBigPlanet gameplay formula and LittleBigPlanet 3 is all the better for having them.

Using one of the new gadgets 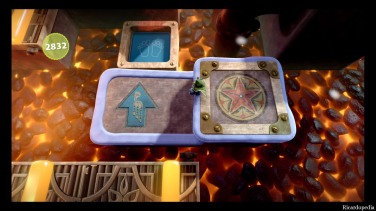 One level switches things up with a top-down camera.

OddSock prepares to take a run.

Visually, LittleBigPlanet 3 looks just like its predecessors, which is a good thing. The LittleBigPlanet aesthetic is a timeless style that makes the game’s levels look like they’re built entirely out of crafting materials and other things found around a home. Whether you’re playing LittleBigPlanet 3 on a 4K HDR television or on an older 1080p screen it is a good-looking game.

In terms of story, what you get in LittleBigPlanet 3’s adventure mode is very similar to the tale of LittleBigPlanet 2. The world of Bunkum is under threat by a malevolent force threatening to suck all the creativity out of the world’s inhabitants and it’s up to you to save the day. Completing adventure mode will take most people about 6-8 hours and you can play through the whole thing solo or with other people via online multiplayer. LittleBigPlanet 3’s adventure mode is fun and the normal difficulty setting shouldn’t pose a problem for most players, though I should note that the final level has a surprisingly large difficulty spike.

Probably the most notable feature, however, of LittleBigPlanet games is the level creation suite available to the player. While I personally didn’t create any levels and thus can’t personally speak to the quality or intuitiveness of the creation tools, I did play through a few levels that other people had crafted and came away impressed. It seems like LittleBigPlanet 3 allows you to build levels about on par with what’s in adventure mode and there’s a ton of levels that you can browse through and play. In fact, there are so many user created levels that you could play LittleBigPlanet 3 for many hours and still be continually finding new ones.

LittleBigPlanet 3 is a good game and an easy recommendation for anyone who enjoys platformers. I was originally skeptical when I heard that LittleBigPlanet 3 was not being made by Media Molecule but Sumo Digital proved that they understand the LittleBigPlanet games and have crafted a worthy entry into the series.