A bit over a week ago I finally got started on playing Destiny 2. I’ve been meaning to get into Destiny 2 for over a month and even though I knew I wouldn’t come anywhere close to finishing it before my trip I chose to at least get my foot in the door. Today I’m going to share some thoughts on what I’ve experienced in Destiny 2 so far. For full context, I’m working through the base version of the game (no expansion packs) and I’m playing on a PlayStation 4 Pro.

Destiny 2 was first launched in September of 2017, so I’m jumping into the game almost exactly two years after launch. One of the features of Destiny 2 is that you can import your Destiny 1 character so long as that character was created before August 2017 and I was pleased to see that I’d be back in action again with my Warlock. It was a little sad that the Titan I created for my replay of Destiny 1 earlier this year couldn’t be imported, but at the same time I had always intended for my Warlock to be my main character so this wasn’t a major disappointment. I also wasn’t all that upset about losing all the items in my Destiny 1 vault. While I had acquired some nice gear, I’m not the type to get overly attached to items in video games, and I also understand that wiping out everyone’s vault was probably a necessary part of making sure that players couldn’t have access to absurdly overpowered weapons and armor at an early point in the game.

At the start of Destiny 2’s story campaign you find the Last City under attack from the Red Legion, a faction of the Cabal Empire. Things go from bad to worse very quickly and you’re soon powerless and on the run. While I can’t give a definitive verdict on Destiny 2’s story until I finish the game, so far it seems to be an improvement over Destiny 1. One of the big complaints about the original Destiny was the lack of worldbuilding in the base version and Destiny 2 seems to be making an effort to flesh out the game’s universe. Grimoire cards are gone (hallelujah!) and storytelling appears to be modeled along the lines of what we got in The Taken King expansion from Destiny 1.

Back in action with my Warlock 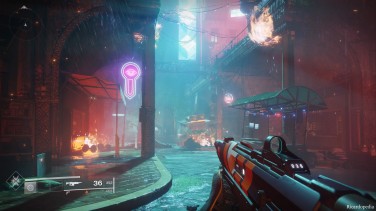 Fighting through the Last City

Fleeing into the mountains

The new social space at The Farm

As you’d expect from a sequel, Destiny 2’s visuals and audio have been upgraded over the original game. It’s not a huge jump, but the improvements are noticeable if you’ve recently played Destiny 1 like I have. Of the two, audio is the bigger upgrade in my mind, mostly because many of the guns and special abilities in Destiny 2 sound better. Destiny 2 also has a great soundtrack, so that’s another big plus in the audio column. On the visual front Destiny 2 looks a bit more detailed and has some marginal graphics improvements over the original. That said, Destiny 1 had a really a good visual aesthetic, so I’m ok with Destiny 2 looking fairly similar to Destiny 1.

Another thing that’s seen only minor adjustments is the gameplay, but in this case that’s completely fine because Destiny 1 had outstanding gameplay and I don’t think it needed many changes to begin with. Destiny 2 is one of those games where the gameplay is so good that you find yourself just running around the various worlds, engaging in public events, and flexing your powers, all while forgetting about the game’s actual missions. I like a lot of the additions that have been made to Destiny 2, such as the Lost Sectors that are fun mini-dungeons that you can clear out to acquire loot. Another nice touch is how the Fallen sometimes scamper around close the ground, which makes them faster, more insect-like, and more distinct from other alien races. New weapons such as the SMG and grenade launcher are fun additions to the Destiny formula and for Warlocks there’s a new version of the Sunsinger subclass that can be used. It would have been nice if maybe two or all three subclasses were new variants, or perhaps if there was a new fourth subclass, but I’m largely fine with how the subclasses in Destiny 2 are formatted.

What I’m not sure about yet is the new weapon slot system. In Destiny 1 we had three weapon slots, with each slot having its own ammo type and its own group of weapon archetypes. With Destiny 2 the weapon archetypes have been decoupled from the first two weapon slots, so you can theoretically have both slots 1 and 2 be carrying weapon archetypes that were previously only available for one of the slots, though you’ll have to be careful since they’ll be consuming the same ammo type. This system seems to be more flexible that what we had in Destiny 1 but it still feels a little weird to me and I’ll need to think about it a bit more before I decide if I like it or not. 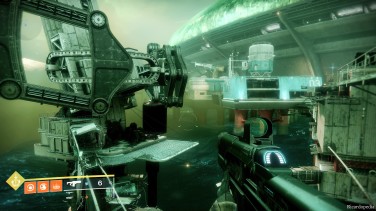 The floating facilities of Titan

Before wrapping this post up let also me take a moment to note a few annoyances that I have with Destiny 2. First, I strangely have not unlocked a Sparrow yet. While I can understand why Sparrows are unavailable on places like Titan, I really ought to have been given one shortly after arriving in the EDZ. Second, I wish the map would center on my location when I opened it up. Third, it would be nice if I could manually activate my Ghost’s flashlight. The vast majority of the time you don’t need it, but there are a few dark places where it doesn’t automatically activate. Last—and I acknowledge that this is a dumb complaint—I’m strangely bothered by the fact that I can’t climb ladders. Obviously I can jump very high in the game and normally don’t need a ladder but for whatever reason it rubs me the wrong way that I can’t walk up to a ladder and climb it.

At the time that I stopped playing Destiny 2 a few days ago I put about 13 hours into the game. I had hit level 21 and had just unlocked Nessus. Currently I have not played any multiplayer matches and I’ve not run any Strikes, so I can’t speak about those parts of the game. My goal is to finish the main campaign of Destiny 2 when I get back from my trip and hopefully have an edition of Late to the Party ready before the end of the year.