While I was traveling around Japan and Korea last year I left some reviews of various places I visited on Google Maps. I tried to focus on leaving reviews for things that either had little or no English reviews, or had very few reviews at all, though I also left a couple of reviews for more popular spots. My goal was to write both my personal assessment of the place being reviewed and provide any information that would be helpful for future visitors. Below are screenshots of a pair of reviews I created while I was abroad that should give an idea of what trying to accomplish.

I attempted to be thorough without going overboard and writing a whole book. Some of my reviews were only a single sentence while others were a paragraph. 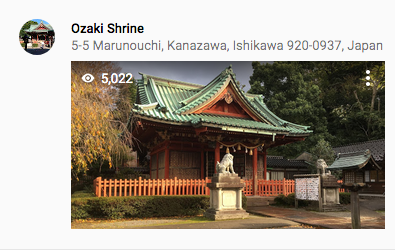 From time to time I get an email from Google letting me know how many views the photos in my reviews are getting online. The view count for my photos range from a couple hundred to several thousand, which isn’t huge but it isn’t tiny either and I’m glad that at least a small number of people are finding them to be useful.

Strangely enough, there’s one photo of mine that’s more popular than all the others and for the life of me I can’t figure out why. While in Tokyo I left a review of a Burger King in the Asakusa district and for whatever reason the photo I took of the restaurant’s front counter has almost 115,000 views. Why has this photo gotten so much attention? No idea, but I have to admit it’s kind of funny that this is my most popular photo on Google Maps.