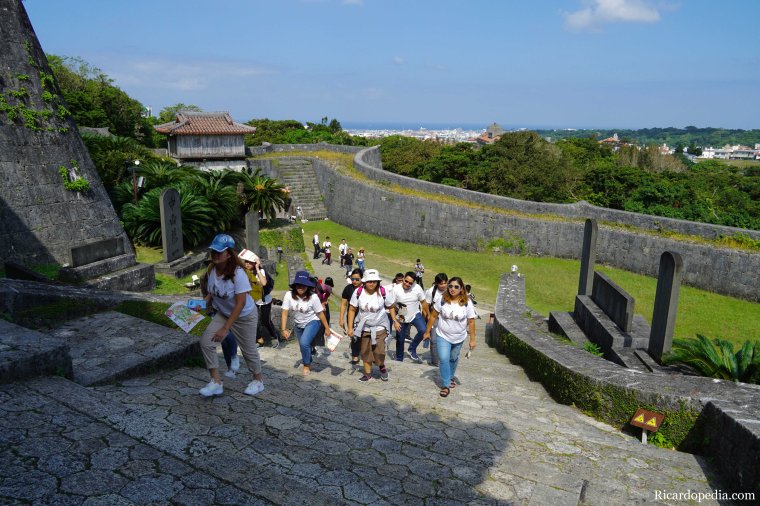 To start off my sightseeing in Naha I visited Shuri Castle, which might be the city’s biggest historical attraction. I took the monorail to the nearest station and from there I walked to the main entrance on the castle’s north side. A big red gate called Shureimon stands on the path leading up to the entryway in the walls. This gate looks different from the big entry gates you see on the Japanese mainland and it’s your first clue that Shuri is one of Japan’s most unique castles. As I was walking up to the gateway in the outer walls I remember there were staff that were asking foreigners like me where we were from, I guess to collect statistics about visitors to the castle. After a little more walking and climbing some stairs I passed through the inner walls and into a small open area where the ticket booth was located. My 1-day monorail pass got me a discount on my entry ticket and once it was purchased I entered the central castle complex. 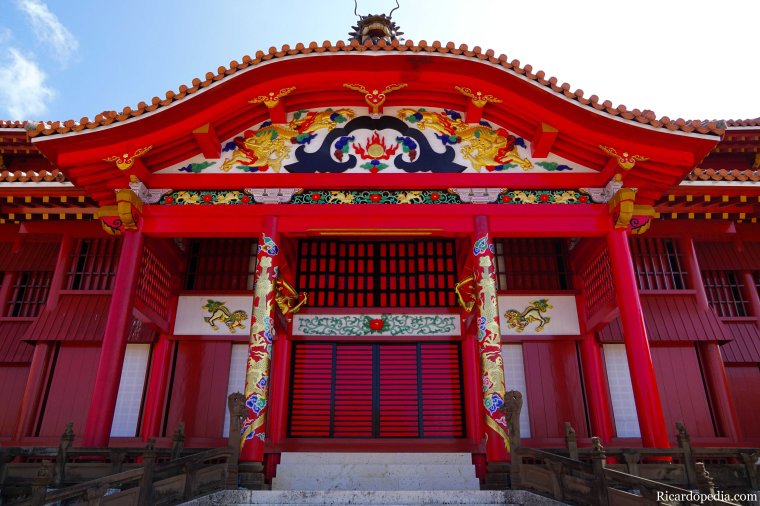 Shuri Castle was once the seat of power when Okinawa was a separate nation called the Ryukyu Kingdom and upon stepping into the central plaza you can see just how different it is from castles on the mainland. In addition to the distinctive red color, the architecture of Shuri’s buildings has some strong Chinese influences, which is understandable given Okinawa’s geographic location. Probably the thing that stands out most to me is that the front door of the palace doesn’t line up exactly with the main entryway into the central plaza, resulting in a diagonal walkway between them. The king’s officials would thus not quite be facing the king when they lined up in the plaza (as seen in a small model in the castle museum) and maybe that was point or perhaps there was some other reason it was built this way. In my head I like to pretend that the castle engineers simply screwed up and didn’t realize their error until it was too late to fix it.

The castle’s original construction date is unknown but it is thought that Shuri was first built in the late 1300s, around the time when Okinawa was unified into a single nation. It was here that the kings of Okinawa held their court up until the 1800s when Okinawa was officially annexed and turned into a Japanese prefecture. Like many castles in Japan, Shuri has been wrecked multiple times over the centuries. The buildings you see in today’s post were from a reconstruction in the early 1990s that finally restored the castle to its former glory after it had been almost completely wiped out in the Battle of Okinawa in 1945. Unfortunately if you visited Shuri Castle today you wouldn’t see some of these buildings and I’ll explain why at the end of today’s post. 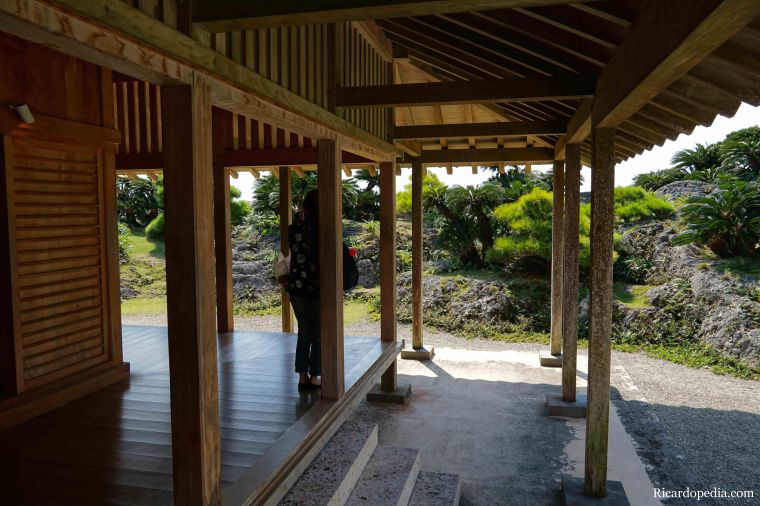 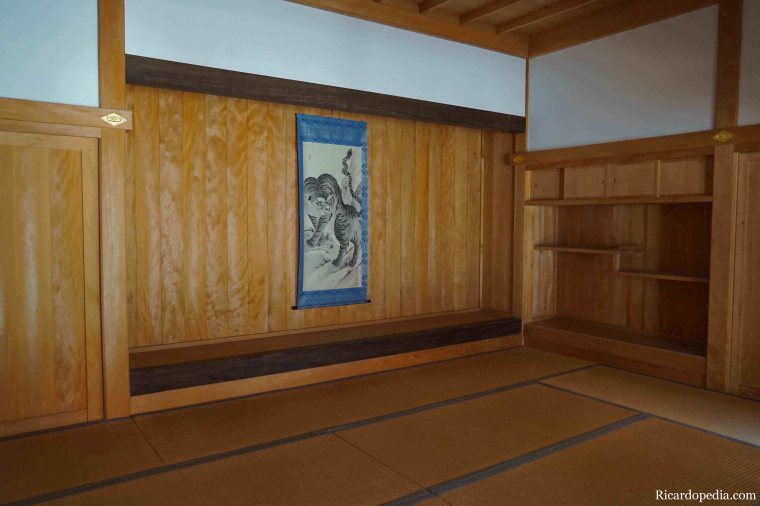 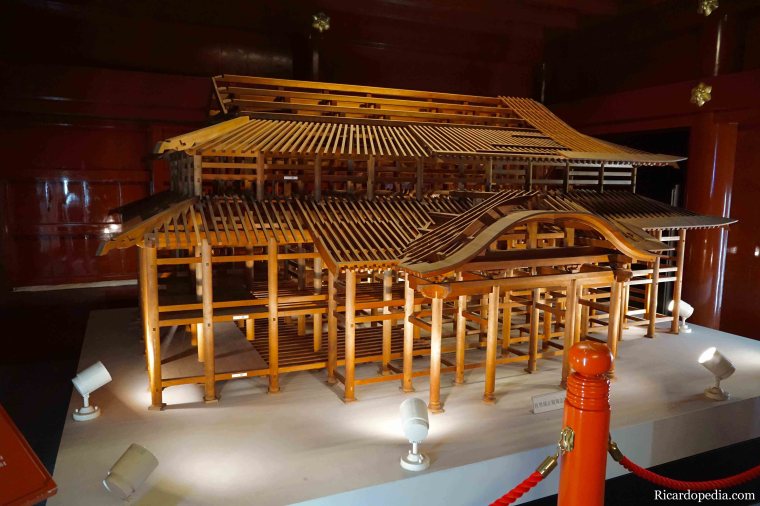 My tour of Shuri Castle next took me through the some of the buildings on the plaza, including the palace. Shuri Castle’s interior has a modern museum showing the history of the castle and also takes you through part of the royal residence. On the second story of the palace you can get a view of the plaza below.

Within the palace there’s a replica of the king’s crown and the royal throne room. The Okinawa kings definitely modeled their thrones more on Chinese emperors than Japanese shoguns. 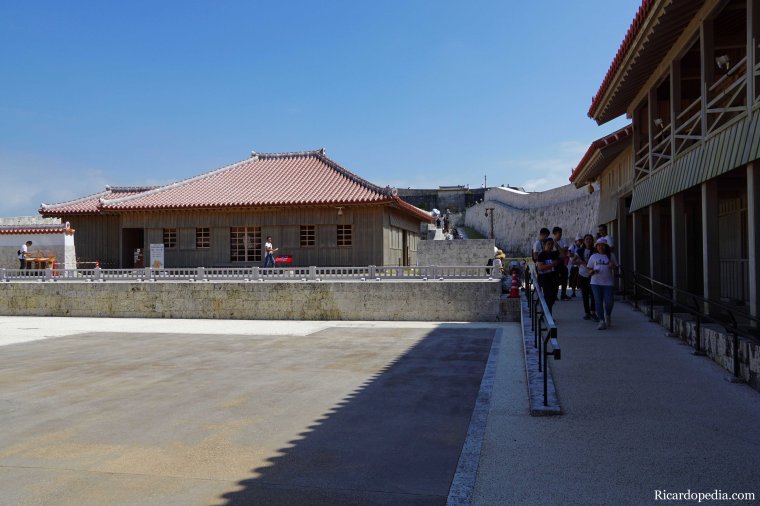 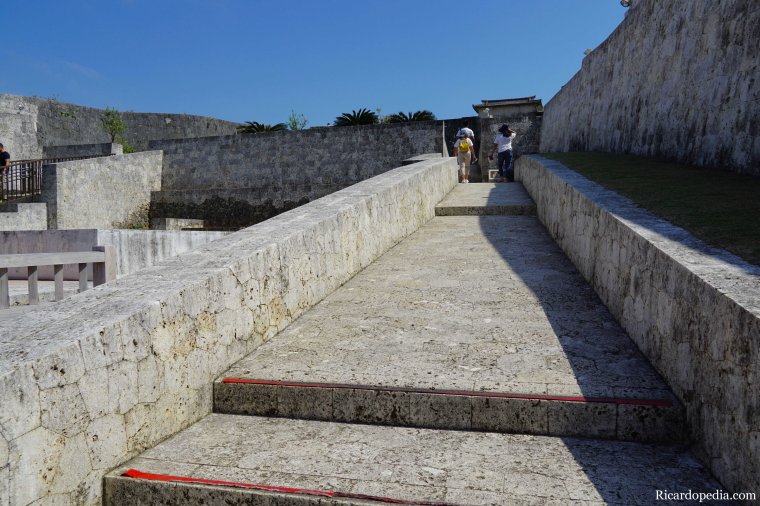 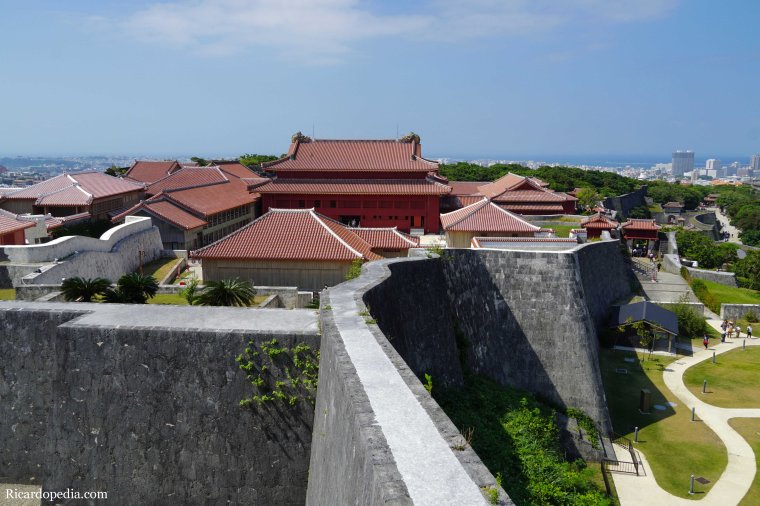 The castle tour route then lead out to the rear of the castle and up onto the walls. You can get a decent view of Naha and the castle grounds from up there and you can even see all the way to the ocean. There was a bit of cloud cover on the day I visited the castle but the sun was shining brightly and really showing the vibrant colors of Naha. 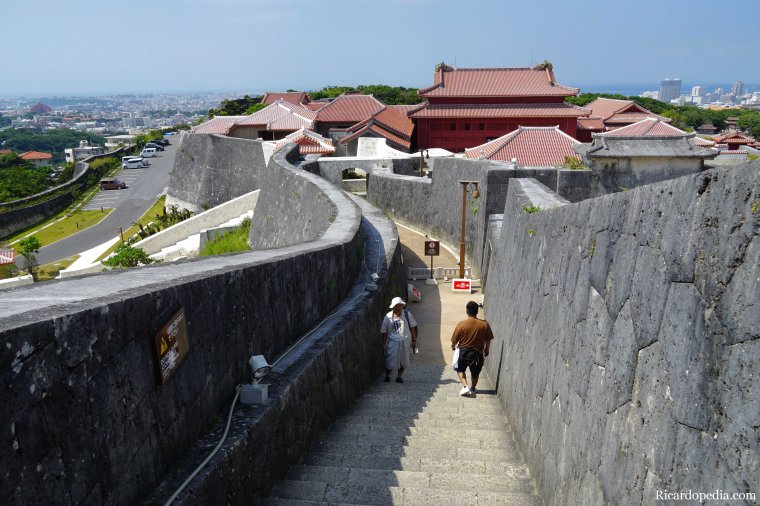 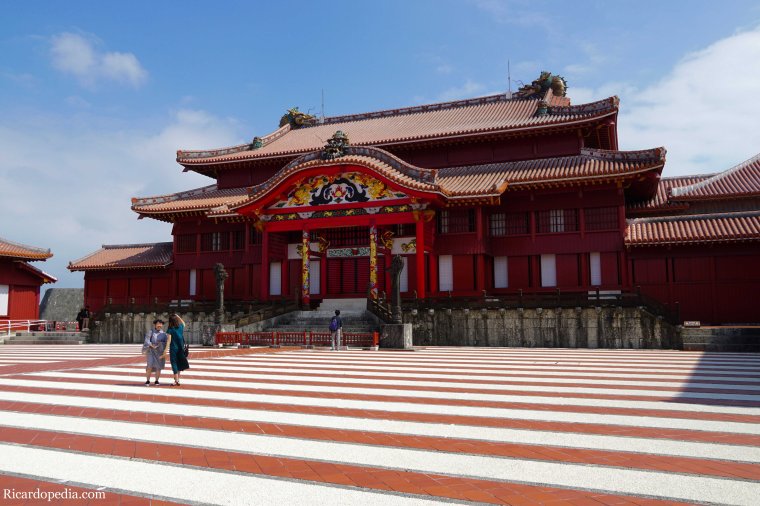 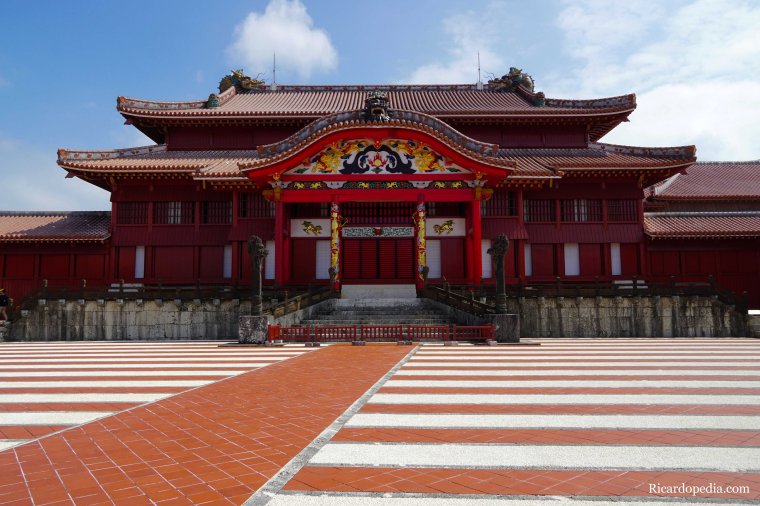 After coming down from the walls the tour route lead me back around to the central plaza in front of the palace. There weren’t as many people standing around as there had been earlier in the morning and I got some extra photos of the buildings. I think it was here that I noticed that the ornaments on top of Shuri Castle’s palace are different from the ornaments on other Japanese castles. On the mainland you’ll see those fish creatures atop castle towers with their tails raised to the sky, whereas Shuri Castle is topped with dragons and you only see their heads and necks. Dragon imagery is all over Shuri Castle and I believe that’s another sign of Chinese influence on the castle’s design.

Once I was done sightseeing at Shuri I took a short break inside one of the buildings and then hiked down to the exit on the castle’s north side. I love visiting castles and this was one of the big highlights of my visit to Naha.

Tragically, Shuri Castle’s palace and several adjacent buildings were destroyed by fire a few weeks after my visit. I can still remember waking up in my apartment in Matsuyama and turning on the TV to see video of Shuri Castle in flames. I don’t know if the cause of the fire has ever been discovered but while I was still in Japan I remember that the authorities had ruled out arson and said it was likely caused by some sort of electrical malfunction. Reconstruction efforts are currently ongoing at Shuri Castle and the official goal is to have the castle buildings fully rebuilt by 2026.