At Nagano Station I boarded a shinkansen (bullet train) that brought me down to Tokyo where I’d connect to another shinkansen bound for Odawara. Arriving in Tokyo Station felt weird, like I was arriving in town at the wrong time, and I think that was because my final stay in the city wasn’t going to happen for another two days. The shinkansen to Odawara only took 35 minutes. Normally a short time in transit is a good thing but this was my final shinkansen ride of the 2019 and it would have been nice to savor the experience a little longer. This was also the last train ride that would be covered by my JR rail pass, so I’d be paying out of pocket for any remaining transit during my final days in Japan.

When I got to Odawara Station I purchased a 3-day Hakone Free Pass that would allow me to make unlimited usage of all public transit affiliated with Odakyu Railway, the local rail company in the Hakone area. At the time the 3-day pass cost 5,000 yen, but I looked online and today it costs 5,400 yen (you can also purchase the Hakone Free Pass in Tokyo’s Shinjuku Station but it costs more to buy it there). On my first day alone I’d get around 2,500 yen of usage out of the pass, so for me it was very worthwhile to buy it.

I rode the Odakyu Railway train from Odawara to Hakone-Yumoto Station and then took a bus to my hostel. It was around 2:30pm when I dropped my backpack in my room. Outside it was pouring rain and windy but I decided I’d make the most of the remaining hours of daylight and so I headed back out to catch a bus down to Lake Ashinoko. Normally there’s a good view of Mt Fuji from the shores of Lake Ashinoko but the rainclouds that day meant I’d barely be able to see the opposite shore of the lake. 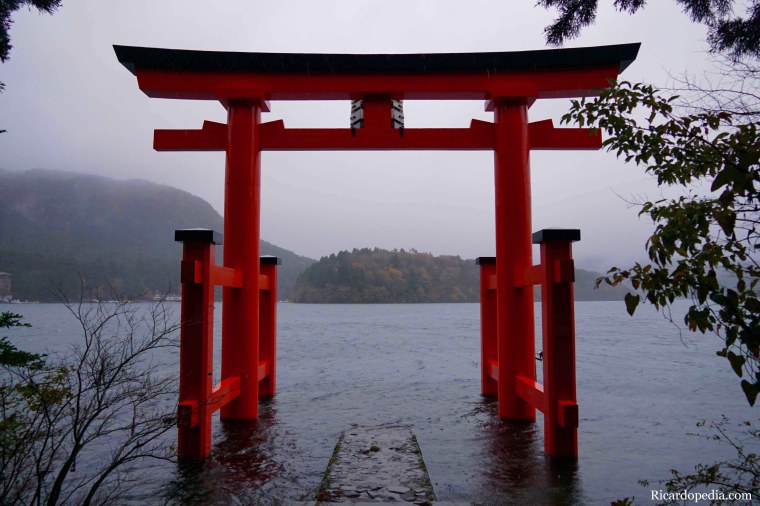 Near the southeastern corner of Lake Ashinoko is a large torii gate that’s out in the water. It is known as the Torii of Peace and it’s associated with the nearby Hakone Shrine. On most days there’s a massive line of visitors waiting to get photos of this gate but because of the bad weather that day there were only about a dozen other people at the gate with me and I didn’t have to wait long before I was able to take some photos. I would have preferred to photograph Lake Ashinoko’s famous torii under better weather conditions but it was nice not having to deal with big tourist crowds.

While I was there I asked one of the other tourists to take a photo of me under the gate. For some reason I thought the photo would look better if my umbrella was closed, and maybe that’s true, but I got pretty soaked while posing for this shot. Personally, I think it was worth it.