Hello everyone, and welcome to Late to the Party, a series in which I discuss video games that I’ve finally gotten around to playing. As much as I enjoy games, it’s rare for me to experience them right when they are first released. Normally it takes me anywhere from a few months to a few years to get around to playing to a game, and because of this I’ve got a considerable gaming backlog that grows every year. From time to time I’m able to chip away at that backlog and whenever I do so I like to write about it in this series. Today I’m going to tell you about Valiant Hearts: The Great War, a 2D puzzle-platformer set during the First World War. This writing piece will be spoiler free and all screenshots and videos are from the first half of the game.

Developed by Ubisoft Montepelier, Valiant Hearts is part of a collection of games created through the UbiArt Framework, a game engine that Ubisoft built to help its smaller teams be able to build artful games more quickly. Cutting down on the needed development time and resources of these stylized games allows them to be made on a smaller budget, thus making it easier for Ubisoft to green light a few game ideas that might not otherwise see the light of day. I think the first time I saw Valiant Hearts was its reveal trailer and being a history buff I was immediately interested, especially because the game took place during World War 1, a conflict that’s normally overshadowed by its larger and less morally dubious sequel. When Valiant Hearts was released in 2014 it got good reviews, solidifying its spot on my list of games to eventually play, and late last year I finally purchased the Valiant Hearts when it went on sale. This month, nearly a century after World War 1 ended, I began my gaming journey into the Great War. 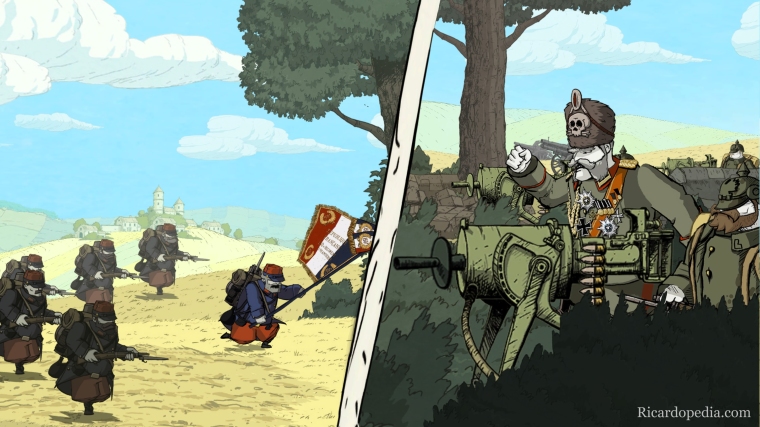 Valiant Hearts opens with the assassination of Franz Ferdinand and the triggering of the interlocking alliances that brought about World War 1. From there the game zooms in to the Western Front to a region of eastern France close to the border of Germany. Karl, a German who lives in France with his French wife and infant son, is deported back to Germany where he is conscripted by the German army. In short order Karl’s father-in-law, Emile, is drafted by the French army, leaving Karl’s wife alone to manage the family farm and raise their son. Soon after this we meet Freddie, an American volunteer in the French army, and later Anna, a Belgian nurse who joins the war effort when the Germans are closing in on Paris. None of them are action heroes or the typical protagonists in video games about war; they’re regular people, each with close, personal connections to the conflict, who are just trying to fulfill their roles and walk out of the war alive. Their intertwined stories mirror the trajectory of World War 1 itself, with the heady feeling of Emile’s regiment charging into battle at the start of the game quickly struck down under a hail of bullets and artillery. Whatever glory is to be found in the early weeks of the war is steadily crushed as the horrors of trench warfare set in and bodies pile up from commanders sending millions of men into the meat grinder. Not since Call of Duty: World at War have I played a historical war game that really captured the carnage of the battlefield, and the only real complaint I have about Valiant Heart’s story is that the German baron who serves as one of the game’s antagonists is a little too comically cartoonish for the serious nature of the game.

Gameplay from the Marne Battle

Cartoonish also would be an apt description of Valiant Hearts’ art direction, but unlike with the aforementioned German baron it is not a negative description. Though it might look cheap and could initially fool some people into thinking the game is less somber than it actually is, the art direction of Valiant Hearts brings out a surprising level of depth. Richly detailed and colorful, Valiant Hearts captures the beauty of the French countryside, the shattered ruins of Reims, the bitter winter at Verdun, and the hellscape of the Battle of Chemin des Dames, all with a drawing style that reminds me somewhat of coloring books. Complimenting the visuals are minimalistic music and dialogue, with the game’s musical score only being audible half the time and all characters speaking in the form of bits of gibberish and individuals words or phrases. This seemingly simplistic presentation in Valiant Hearts never detracts from the bleakness and butchery of World War 1, however, to the point where I’d say it’s one of the more striking depictions of a historical conflict I’ve seen in gaming, not so much in that blood and guts are flying everywhere, but in the sheer amount of death and destruction the game wants you see. 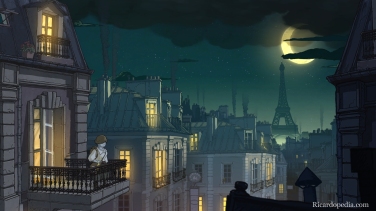 Scenes from the first two chapters

With all of the violence of war, you might be surprised, however, by how little of it is inflicted by the protagonists. Though they throw some grenades, operate artillery, detonate explosives, and perform other war-related tasks, none of them ever picks up a gun and on the few instances where they end up killing someone the death usually occurs off-screen. Most of the time while you’re traversing Valiant Heart’s 2D levels you’ll be helping people instead of harming them, which is not what you normally associate with war games. Throughout those levels you’ll also be solving puzzles, sometimes with the help of a brave rescue dog who is practically the game’s sixth protagonist, as well as getting history lessons from collectibles and diary entries. Some players might be annoyed by how often you’ll be prompted to pause and read these optional historical tidbits about the war, but history buffs like myself will eat them up. The other things that can be annoying in Valiant Hearts are the boss fights—which are mercifully short—and the rare technical glitch. Over the course of my playthrough on my PS4 I had two separate occasions where the game bugged out on me and I had to exit back to the menu, but thankfully each individual section of Valiant Hearts is short, so it only took a minute or two to get back to where I had been. In total, Valiant Hearts will probably take about 6-8 hours to finish on a first playthrough, depending on how much time you spend looking for collectibles and taking in the scenery. 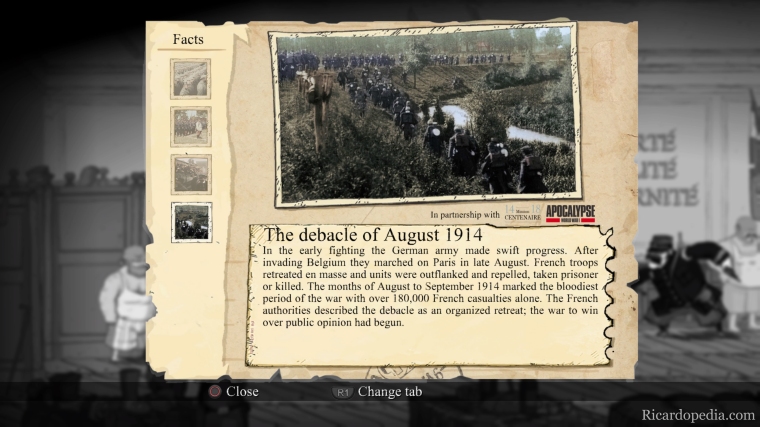 One of the optional history lessons

During my time with Valiant Hearts I realized that the game did something that I’ve never seen in a game before, in that it felt like I was playing through one of the old war documentaries that I liked to watch when I was young. Nostalgia is a powerful thing, and it certainly contributed to me liking Valiant Hearts, but even if you’re not a history buff like me the game’s fundamental strengths are undeniable. Valiant Hearts is an 8.5 out of 10. I’d love to see a sequel one day, though I’m not sure what the best approach would be. Ubisoft could jump to another sector of the war, such as the Eastern Front, or maybe they should leave World War 1 behind and do a story set in another conflict. I know these are biased suggestions, given that I’m American, but I’d like to see either the American Revolution or the American Civil War. Make it happen Ubisoft, and don’t forget to include another faithful dog in it. 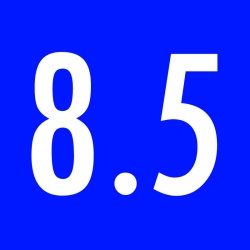